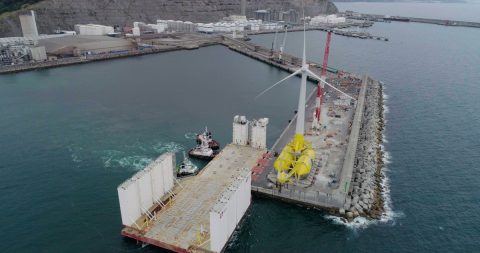 Noatum Project Cargo team recently launched the DemoSATH floating offshore wind prototype with an installed wind turbine in the inland waters at the port of Bilbao. The loading and launching operations of DemoSATH took place at the Punta Sollana quay, where the pre-stressed concrete unit, with a 2 MW turbine mounted on it.

The project is being developed by Saitec Offshore Technologies and RWE Renewables, and the prototype is bound to the BIMEP test area site, this time on a real scale.

To float it, the unit was loaded onto the deck of a semi-submersible barge using self-propelled modular transporters (SPMTs). The barge was then ballasted and submerged until the DemoSATH unit was afloat, after which it was towed closer to the quay, where it is currently moored.

Saitec Offshore Technologies and RWE Renewables partnered to develop the DemoSATH project in 2020. The 2MW floating platform, equipped with SATH technology, will be installed at the BiMEP test site in Armintza, Bizkaia, two miles off the Basque coast, where the sea is 85 metres deep.

SATH design enables its components to be prefabricated in concrete and uses a single point mooring system that allows the structure to rotate and align itself with the direction of the wind and current. The aim of this demonstration project is to test the technology for industrialisation for offshore wind farms in deep waters.

Port of Bilbao noted that the project has been part-funded by the Basque Government Department of Economic Development, Sustainability and the Environment and the European Regional Development Fund (ERDF).