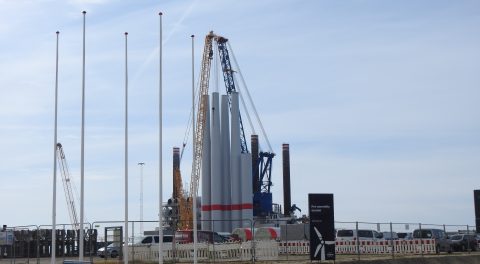 Anders Midskov, Port Manager for Siemens Gamesa, notes that within the last 12 years, every load-out has been done on time in Port Esbjerg, and he adds: “With our present site, we have successfully had several hundreds load-outs from the Port of Esbjerg – in a safely and efficient way efficiency, and are off to a good start with the Kaskasi project”.

The North Sea offshore wind market is forecasted to experience unprecedented growth, as manifested by the recent Esbjerg Declaration. In it, the Chancellor of the Federal Republic of Germany and the Prime Ministers of Holland, Belgium, and Denmark agreed to develop the North Sea as the Green Power Plant of Europe and install 150 GW offshore wind by 2050.

Dennis Jul Pedersen, CEO of Port Esbjerg, says: “Given that the Esbjerg Declaration was signed on the site which we developed together with Siemens Gamesa, the first load-out for the Kaskasi offshore wind project also showcases our commitment to the plan for offshore wind in the North Sea.”

The development of the most efficient pre-assembly site builds on the vast experience of Port Esbjerg and Siemens Gamesa, which both consider it relevant to share their experiences with other I know Elsiva rinstallation ports.

The CEO of Port Esbjerg states: “We receive many visitors from ports that have plans for offshore wind operations, and we always share information and details of how best to take part in this green transition.”

The competitiveness of offshore wind ports is related to the location of the ports in context to the installation site for the offshore wind farm. As for the plans outlined in the Esbjerg Declaration, Port Esbjerg is ideally located near the North Sea. 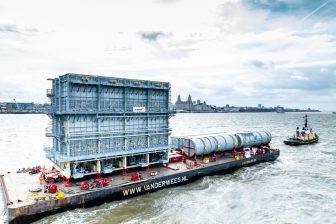