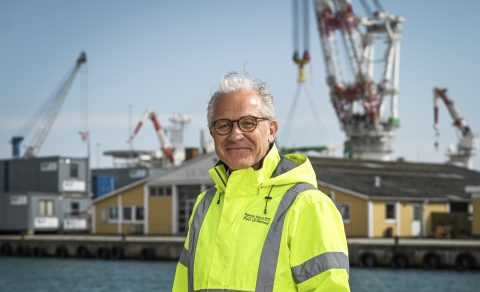 The Danish island of Bornholm has been selected as the site for one of the two Danish Energy Islands, as per the Danish Climate Agreement of June 2022. The Port of Rønne is expanding, so as to be able to handle the associated volumes to come due to the huge interest in offshore wind in the Baltic Sea.

The Port of Roenne is located on the west coast of Bornholm Island, home to almost 40.000 people. The port’s strategic location makes it an ideal hub for servicing large-scale offshore wind projects in the Baltic sea. “Right now, Arcadis Oost project is the largest offshore project we are handling in Rønne. The project, operated by Vestas, involves 27 wind turbines,” says Lars Nordahl Lemvigh, Port of Roenne CEO.

The island is set to become a one-of-a-kind wind energy hub with the state-led Danish Energy Island project. Indeed, “There are two Energy Island projects in Denmark. One in the North Sea, with a man-made island hosting a transformer station, surrounded by wind farms,” explains Lemvigh. The created energy is gathered on the island, and can then be used by nearby consumers, or potentially used to produce green fuels via a Power to X (P2X) facility.

”The second island will be here, on the island of Bornholm. Besides Energy Island, there are plans for two offshore wind parks around Bornholm with a total capacity of around 3 GW. At the moment the Danish government is preparing a tender for the land station that will handle all the electricity at land,” states Lemvigh. “The construction phase is scheduled for 2028-2029, and the island should be operational in 2030, depending on how the tender goes. As such, we are trying to get the island ready to welcome this state project.”

Research is being done into the best ways to turn Bornholm into a green island. “Preparation is divided into different steps. At the moment there is a Power to X (PtX) feasibility study happening, and a test site will be set up in partnership with the Danish Technical University (DTU). By the end of August next year, we will have the conclusion of the study, and from there further discussions can happen,” adds Lemvigh.

“Alongside that, we are in a bunker hub study called Bornholm Bunker Hub. We are looking at fuel production, as well as the bunkering market, and procedures used for handling green fuels. Finally, we are looking at vessel and engine solutions. We have many partners in this, including ship engine manufacturers, shipping companies, developers, universities, other ports, and so on. We’ve tried to include the whole value chain.” says Lemvigh.

“In future, we hope to turn this research into actual designing and planning, but a lot of work still has to be done. We have yet to see what kind of fuels we will be dealing with, or how to handle them safely. Ammonia will probably be the cheapest green fuel to produce, but there are many safety concerns. As such, there is still a very long way to go,” he concludes. This research is key, as Bornholm’s location means it could become a green refuelling station for some of the approximately 60,000 ships that sail past the island per year.

“Another question we are asking is the following: how can Bornholm benefit from becoming an energy island?,” explains Lemvigh. Indeed, “The port is a catalyst for business, an important engine. We must be a strong supply hub, as we are critical infrastructure for the island, instrumental to political ambitions in terms of the energy transition in the Baltic Sea. Our role is vital to the health of the island of Bornholm, and we are aware and proud of this responsibility.” he states.

“At the moment, there is a bit of pushback from landowners on the island, who own the land on which the government wants to place the station. Right now, it is going through a public process of town-hall meetings to discuss concerns from the local population, in line with Danish democratic principles,” shares Lemvigh.

“There are also plans to have an ‘Innovation House’ in the city of Roenne, where the public can come and learn about the vision we have for the project, we can have conferences, energy tourism… We are also discussing having a residential college here, in collaboration with DTU, so that we can use the project to educate future engineers and so on,” he continues.

“To be equipped to handle this project, we are looking into a port expansion phase in the next few years. Right now, we have a planned expansion of 250,000 square metres for offshore projects and other of our activities with heavy-duty areas with high bearing capacity. We also have 600 metres of new quays for offshore planning, and an additional 270 metres of quay with a heavy load ramp for ro-ro activities,” said Lemvigh.

“Another project we have planned in the coming years to come involves filling up an old fishery basin, which will give us an additional 100,000 square metres of space, to be ready by 2025. These 10 extra acres will allow us to handle several offshore projects at the same time.” The port will also be able to welcome larger vessels, after the deepening of several basins. “We are also modernising the entire harbour. The western part of the harbour will also be getting a new 400 metres long quay and pier for cruises and more,” he adds.

“Today we welcome a mix of industry and passenger traffic. We want to divide that so that the northern part of the harbour handles passenger traffic, and the southern harbour will be the centre of industrial activity. We believe that all parties will benefit from this division,” he explained. “But our port is not all about offshore work. It is a big part of what we do, but we part of an island and the ferries, bunkers, and freight operations are the lifelines of our island. We therefore also welcome many cruises, which support our tourism industry. But right now we look into a future where the offshore projects will be a larger part of the port and a larger part of the future of Bornholm,” concludes Lemvigh. 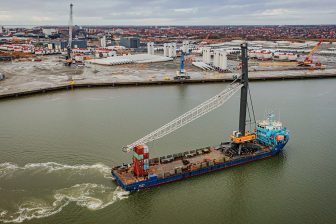 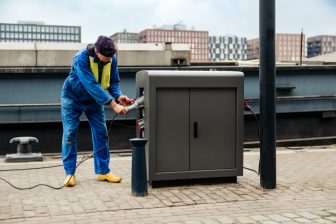 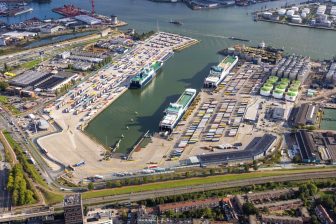