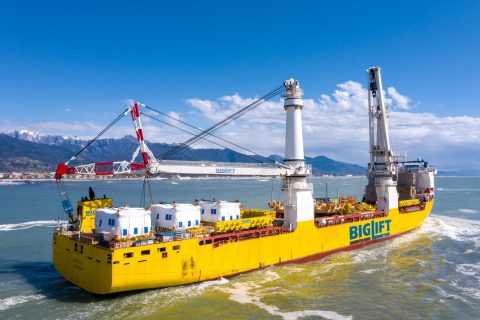 Over a six month period BigLift Shipping had the task to transport project cargo for the Coral floating liquefied natural gas (Coral FLNG) development in the Rovuma basin offshore Mozambique.

BigLift Shipping was contacted by TechnipFMC to supply three heavy lift vessels for the job. These were contracted to mobilise client’s equipment from various ports in Europe – Aberdeen, Moss, Le Trait, Bilbao and Marina di Carrara – and were destined for Maputo and Pemba Bay.

To honour the contract, BigLift Shipping deployed Happy Sky with her flyjib, installed for extended lifting height and reach,  Palmgracht with the hatch cover support structure, allowing for carousels on deck to up to 3,500 mt and Happy Ranger carrying a carousel over a hold filled with buoyancy modules and reels, the company informed in its latest BigNews magazine.

In order of sailing, Happy Sky loaded tether piles and template foundation piles, as well as buoys in Bilbao, Spain and Marina di Carrara in Italy. On this vessel BigLift Shipping mounted the in-house developed flyjib and discharged the cargo directly onto the PSVs of its client Technip.

Voyage two was in the hands of the crew of Palmgracht. They loaded carousels and reels in two shuttle voyages between Le Trait, France and Mozambique.

In Mozambique the cargoes were transferred onto Skandi Africa and various PSVs, both in the Port of Maputo and in Pemba Bay. This was the first project where the in-house developed hatch cover supports, allowing for greater weights on deck, were put to use.

The last voyage of the series was carried out by Happy Ranger, that loaded another carousel and reels as well as buoys in Aberdeen, Moss in the United Kingdom and Le Trait, France.

The Coral FLNG project includes producing and selling gas from the southern part of the Coral South field in the Rovuma basin, using a floating plant for liquefying natural gas (LNG) with a capacity of 3.4 million tonnes, linked to six subsea gas producing wells.

Led by Italy’s Eni, the project agreed to sell 100 percent of its capacity to bp and subsequently reached the final investment decision on the project. Besides Eni, other project partners include CNPC, Galp, Kogas, the Mozambican state company ENH and Exxon Mobil.

The FLNG unit was built at the Samsung Heavy Industries yard in South Korea. The unit named Coral-Sul FLNG has arrived in Mozambique at the start of the year and is expected to start producing LNG in the second half of 2022.