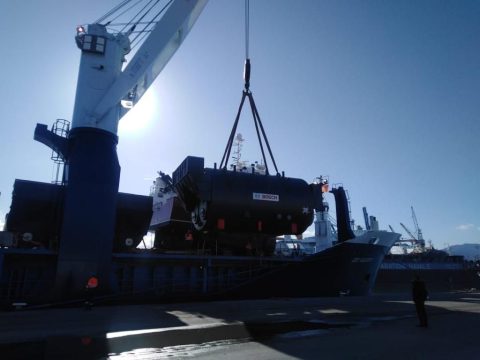 French freight forwarding specialist FMI Grupe (Fos Maritime International) has continued its support for Cevital Group’s operations in Algeria. In the latest shipment, the company shipped a total of 360 tons and approximately 927 cubic metres from Antwerp to Bejaia in Algeria.

Cevital Group is building a new oilseed crushing plant in Bejaia and still expects to inaugurate the facility by the end of the year.

FMI partnered with Amasus, chartering their 3,750 dwt multipurpose heavy lift vessel Deo Volente which was chosen as its capacity was perfectly adapted for the cargo, allowing for a fast operation both at loading and unloading. According to the vessels AIS data, the cargo was ferried from Antwerp to Algeria in the last week of December.

The cargo was delivered on board Amasus’ 4,200 dwt heavy lift vessel, the Eemslift Ellen. The vessel departed port of Antwerp at the end of October and completed the unloading in Algeria in the early days of November