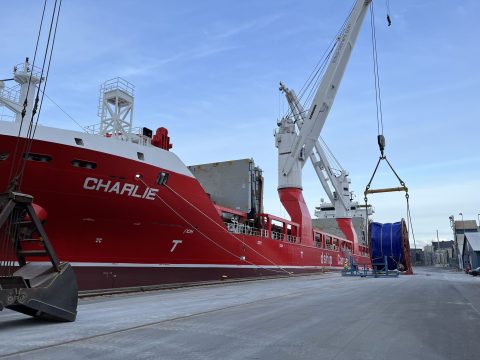 Only a couple of months after joining the dship Carriers fleet, the eco-friendly F-500 type MV Charlie delivered the last flexible product for the ten risers for Havfram’s Balder Future EPCI project.

Havfram, formerly known as Ocean Installer has continued to make progress at the job for Vår Energi and reached another major milestone with MV Charlie delivery. The MV Charlie is equipped with two Liebherr cranes, featuring a lifting capacity of 250 metric tons each, and has a deadweight of 12,385 mt.

After placing a contract with NOV in late 2019, one of the biggest of its kind in the North Sea, a significant amount of hardware has been designed, engineered, manufactured, transported and subsequently installed. Nine loadouts and deliveries were required to handle the volume of hardware, comprising nearly 90 kilometres of flexibles, multiple MWA anchors and structures, diverless bend stiffener connectors, annulus vent gas monitoring cabinets and more.

April has seen the final delivery and loadout of the last flexible product for the ten risers, which will subsequently be installed in 2023 when Havfram will also hook up the refurbished Jotun A FPSO. Balder Future EPCI project was awarded in a consortium to Havfram and Baker Hughes in 2019.

The upgrade of the Jotun FPSO is part of Vår Energi’s investment in increased oil recovery from the Balder field in the North Sea. The Balder Future project will extend the life of the field (PL 001) by 2045, giving Norway’s oldest license a lifetime of 80 years.

In addition to the upgrade of the Jotun FPSO, 13 new production wells and one water injection well will be drilled on the field. The project aims to extract another 136 million barrels of oil equivalent (Mboe).