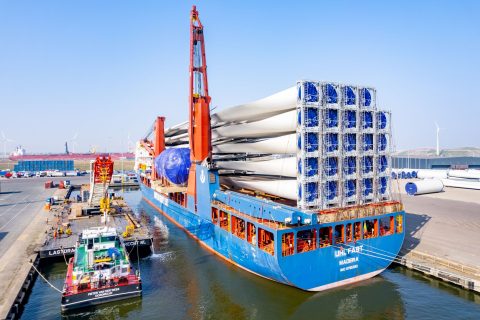 Facilitation of wind farm projects in the port of Amsterdam is picking up and TMA Logistics has already wrapped up third project at the port. The company added Windplanblauw project to the list, after handling logistics for the Windpark Westermeerwind and Windpark Fryslân projects.

For the Windplanblauw project, TMA Logistics, noted that 61 new wind turbines around Lelystad and Dronten will be built. A large part of the parts needed to build the wind farm will be stored and transhipped in the Amerikahaven. It concerns 227 tower parts and 111 blades.

Michael van Toledo, General Manager at TMA Logistics, noted that from early March to mid-April, ships came and went at the company’s terminal. In addition to usual container handling, breakbulk, rolling loads and intermodal transport, the terminal was now also full of wind turbine components. Such as tower parts, nacelles, generators and the huge blades.

The parts made in the factories in Vietnam, Turkey and China are brought to Amsterdam by seagoing vessel. ”A complex operation. Because what you saw with this project was that ships often arrived at the same time. It is really a matter of adjusting and measuring to get all parts of the ship in the right place,” Michael van Toledo said. ”

The blades, for example, are matched in threes. That means you have to keep them together. But also on the ships themselves, by the way. The parts of the wind turbines are attached with chains or are welded. To make a safe crossing by ship, of course. But in the port you often spend a day loosening those huge parts. Fortunately, we now have a lot of experience with these types of projects and we know how to handle these large vulnerable parts with care.”

By road and water towards Flevopolder

After the parts have been stored at the terminal, the tower parts are transported to the Flevopolder by inland shipping. With about two or three tower sections per ship, that is again almost 90 inland vessels for this project. The blades go to the wind farm via the road.

”The blades are no less than 80 meters long. Everything has to be done carefully. Just to move the blades on the terminal, we sometimes have to remove several lampposts in order to make the turning circle at all. We are proud if everything goes well of course. Then the magazines go to Lelystad via the A5. This takes place at night, so that other traffic is not hindered by it. Weeks in advance, transporter van der Vlist coordinates the transport with Rijkswaterstaat so that they can prepare the transport and the road,” Toledo says.

He added that a project like this is all about space. “Space in the port is scarce, so we use it optimally here. The blades are of course huge wind catchers and you would rather not stack them, because you don’t want any damage. This project was based on approximately 6.5 hectares of storage. But we are already on more than 11 hectares. You must have that space.”

He also noted that finding the right staff remains a challenge as such projects require crane operators, truck drivers, or people in the holds.

Windplanblauw is being developed in the northwest corner of Flevoland, in the municipalities of Lelystad and Dronten. No fewer than 71 wind turbines will be replaced by 61 larger turbines. The new turbines have a greater capacity and the amount of electricity they generate is equivalent to the annual power consumption of 1 million households.

Renewable energy is one of the essential pillars for a sustainable energy and industrial system. In order to remain an energy port in the future, offshore wind has been an important market for the region for years. Both in the field of installation, production and maintenance. The new wind farm to be built fits in with the ambition of the Dutch government to generate 70 percent of the electricity from renewable sources by 2030.