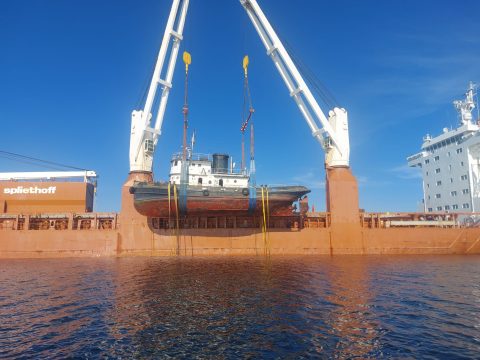 An ST 479 Tiger tugboat, used during the Second World War, and subsequently left in Europe, has been brought back to the United States, its country of origin. Transported aboard Spliethoff’s multi-purpose vessel Snoekgracht,  it arrived in Florida from Sweden last week.

Built-in 1940 at a yard on Lake Beresford, the Tiger tugboat was involved in the Allied landing in Normandy in 1944. The historical society, DeLand Historic Trust (DHT), spent nearly a decade trying to get this well-maintained tugboat across the Atlantic, and back to the United States.

The tugboat owners had the ship docked in Stockholm, Sweden. DHT President, Dan Friend, spent time in Sweden preparing for the trip. He first had to rid the boat of squatters who had taken up residence in the tugboat. Then all fluids, such as fuel, oil, bilge and ballast water had to be removed. After that, the 140-ton tug could be hoisted aboard Snoekgracht. The entire operation cost approximately $200,000. This sum was donated by an anonymous benefactor.

Upon arrival at the Port of Jacksonville, Florida, the Spliethoff crew lifted the 140-ton tugboat onto the St. Johns River using the vessel’s onboard cranes. Cross State Towing then guided the tugboat to a private dock in Jacksonville. Sometime between now and October,  the Tiger will head across the St. John River back to where it was built, at the DeLand shipyard on Lake Beresford. There she will be expected and put on dry land as a monument.

The final leg of the Tiger tugboat’s journey will take some time to arrange as it has a depth of 2.70 metres, while in some places the St. Johns River is only 2.10 to 2.40 metres deep. So there the boat will have to be helped across shallows. Depending on how often this has to be done, DHT estimates the cost of this as being between $60,000 to $200,000 USD. A sponsorship campaign has been launched to raise funds for this project.