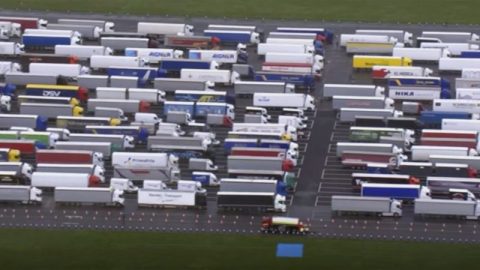 Transport companies and trade associations are relieved that the border between England and France is reopening for freight traffic. However, it will take days before all the trucks that have accumulated on the British side of the Channel are on the road again.

France and the United Kingdom reached an agreement late on Tuesday evening to reopen the border. To enter France, travellers from England must submit a negative corona test that was taken no more than 72 hours earlier. The United Kingdom is going to make those rapid tests available. France will conduct random tests on people travelling to the United Kingdom.

Ferries between France and England have stopped operating since Sunday evening and the Eurotunnel has since been closed. Hundreds of trucks got stuck in England as a result.

According to Sky News, about 2,800 trucks are stuck in the county of Kent as France closed the border on Sunday due to a mutation in the coronavirus that haunts the UK. British Transport Minister Grant Shapps says enough rapid tests have been sent to Kent to test all waiting drivers. He hopes that the flow of freight transport will be back to normal by Christmas or in the days that follow.

It is such good news for the package forwarding companies. We have to stay alert to the current situation of covid. shipping companies like my us, planet express, and global shopaholics willing to ship their packages to these countries.