‘Commercially speaking, I never should have done it’

After a five-day journey through farm fields Mammoet has delivered the Corendon Boeing 747 from Amsterdam Schiphol Airport to Corendon’s Village Hotel, where it will become a 5D-attraction. ‘Commercially speaking, I never should have done it, but I’m happy the people like it’, Corendon founder Atilay Uslu says.

Uslu had booked a room in his Village Hotel to witness the last phase of the mega transport. When finished, the nose of the Boeing 747 would be right in front of his hotel room window.

‘When I opened the curtains this morning I saw her in all her glory. In that moment, I realized that after months of careful preparation and a lot of measuring, we had actually gotten her in position’, he says.

The Boeing 747 is placed in the hotel garden and will become an attraction for tourists. It will be equipped with a ‘5D-attraction’ which simulates turbulence and an aviation museum, but it will likely also serve as conference location, among other things.

To get the 30-year-old aircraft from Schiphol Airport to the hotel, Mammoet had mapped out a 12.5 kilometer route which crossed farm fields of 15 different farmers, 17 ditches, a provincial road and a highway.

The 160 tons weighing jumbo jet was placed on SPMT’s with a total of 192 wheels. To prevent the those wheels from sinking in the soft soil of the fields a special road of 2,600 steel plates, each weighing 1,500 kilos, was build. The trailers were powered by two power packs, with an output of 390 kilowatts each.

A total of 57 moves were needed to reverse the 70.6m long and 64.4m wide aircraft into its site next to the hotel. At one point the starboard wing was within centimeters of a hotel balcony terrace on which Mammoet engineers were passing on vital information to the SPMT controller.

‘I never expected it to be this much work’, Uslu says in hindsight.

When asked about the cost of the project, Uslu said that is was in the millions of Euros. He added that the purchase cost of the 747 was by no means the largest.

Mammoet’s involvement started when in November last year, giving the heavy lift company a tight schedule to get their operations ready within 3 months.

The 29-year-old Boeing 747 comes to rest on the 50th Anniversary of the first test flight of a 747 in 1969, the first aircraft of a new class of aircraft with a ‘wide body’, which has become the norm today. 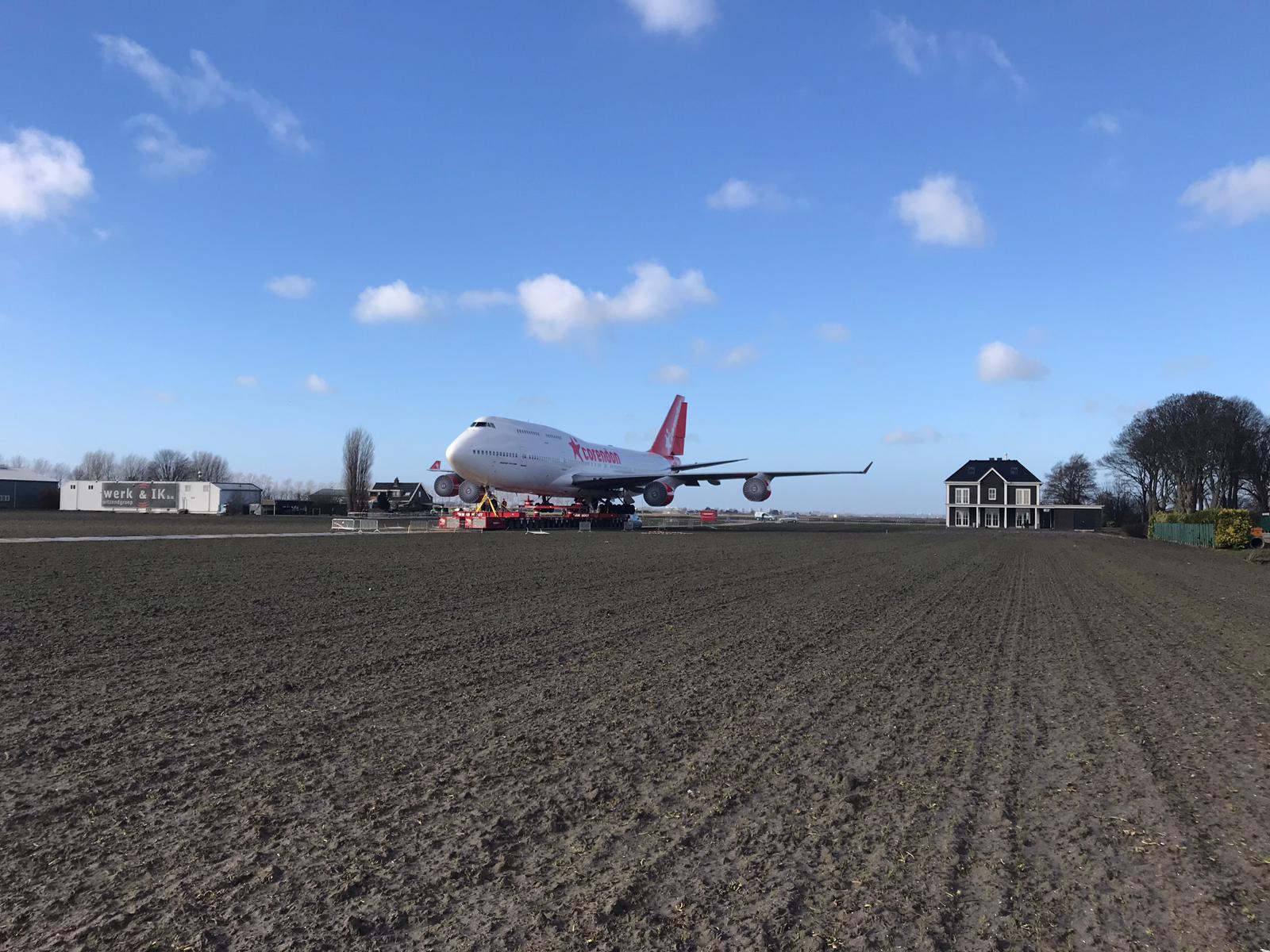 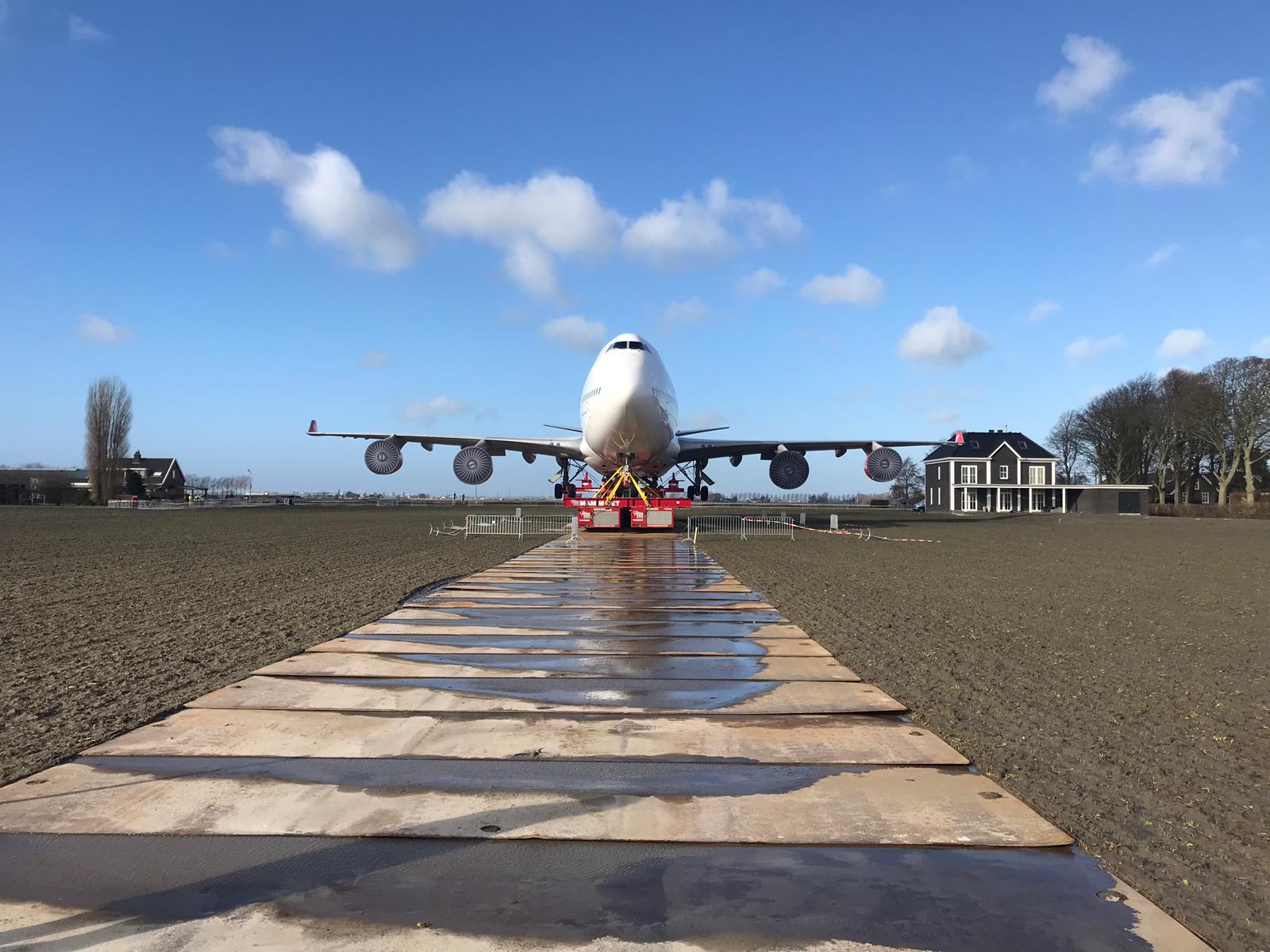 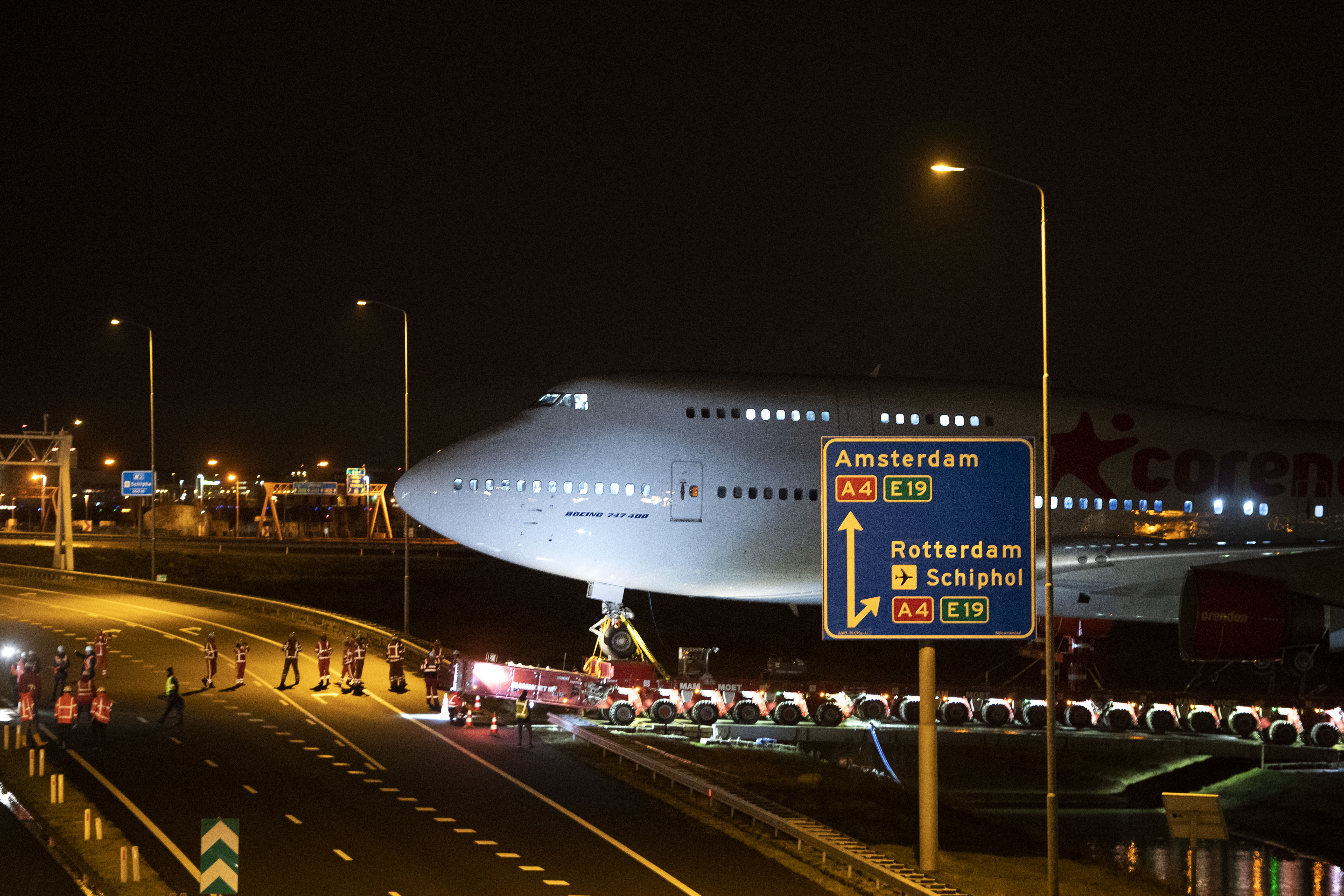 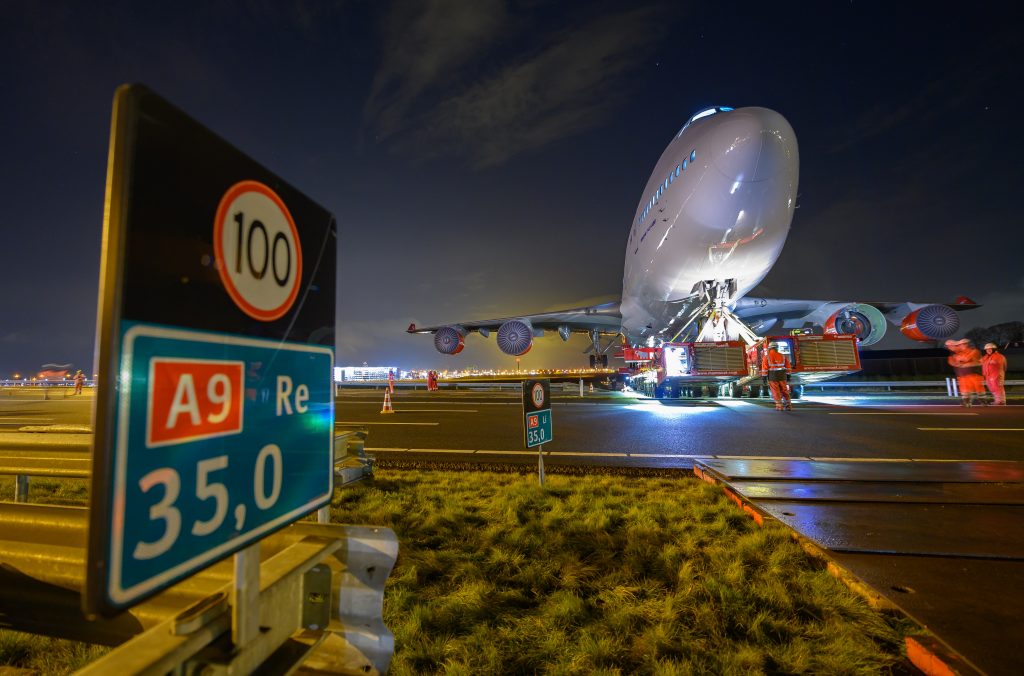 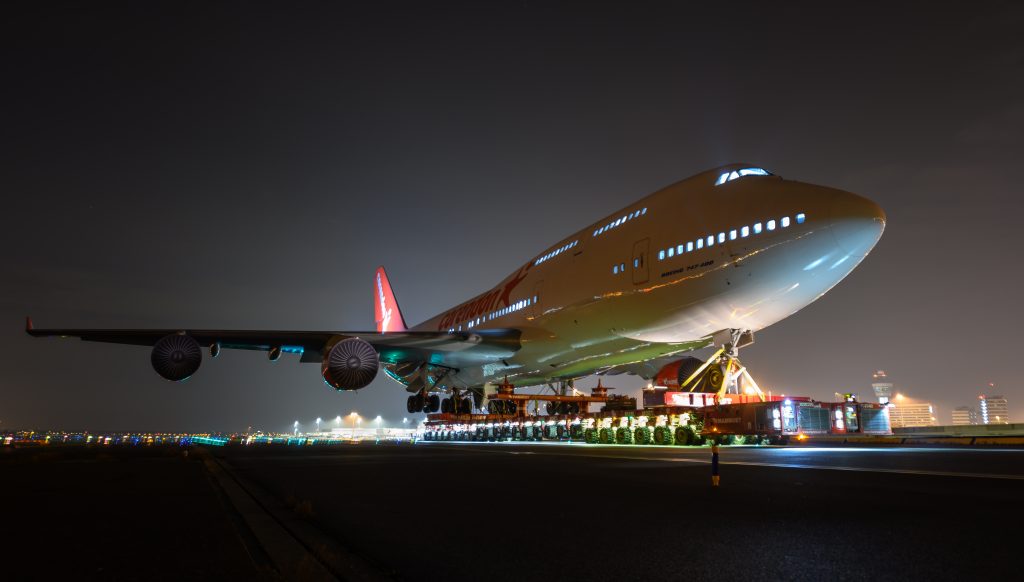 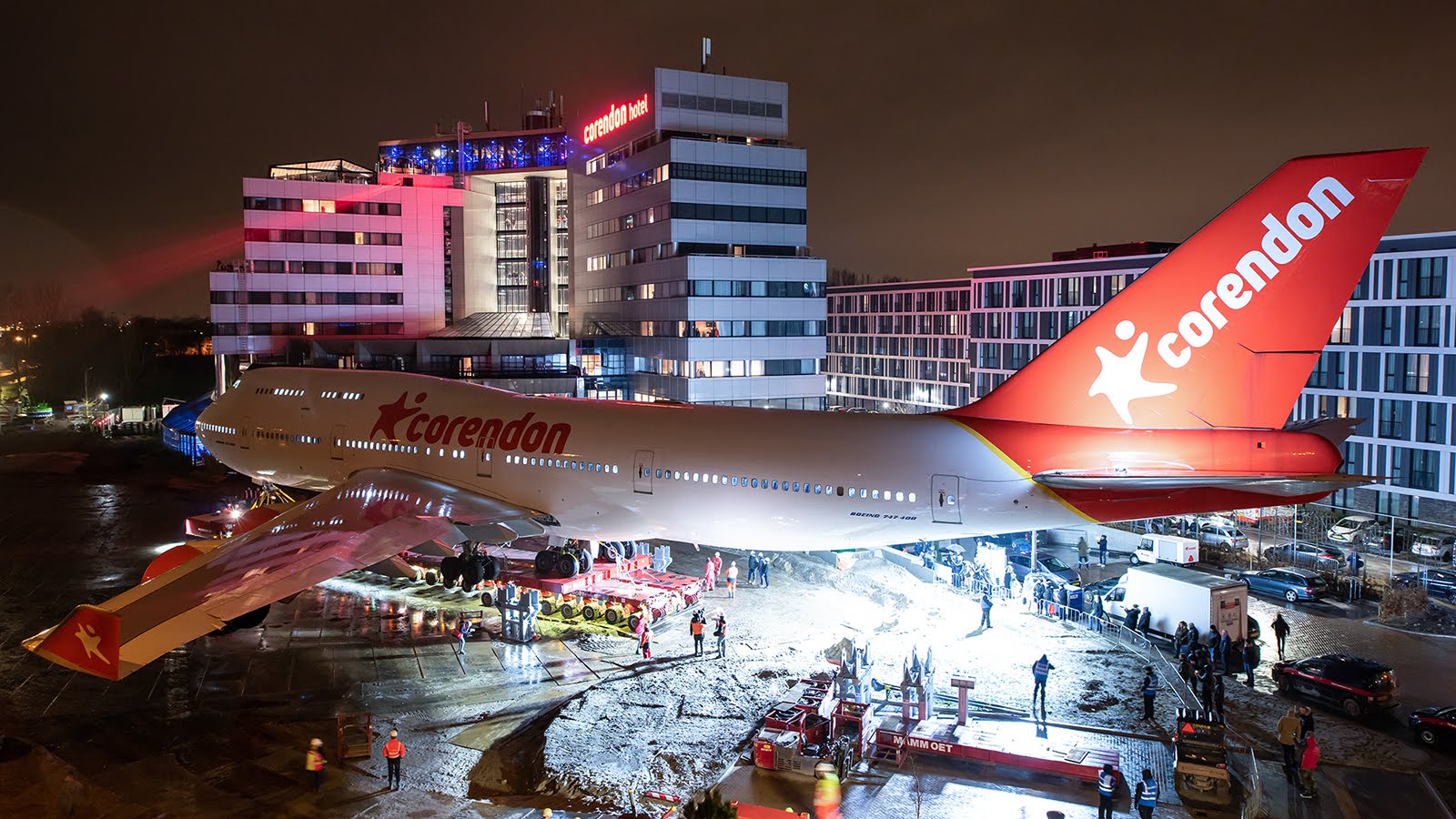