Grimaldi pleads for stringent rules after another vessel catches fire

Italian Grimaldi Group calls for more stringent control and regulations on car batteries after another ro/ro vessel of the shipping company caught fire at sea. The ship’s crew successfully distinguished the fire, averting another disaster like the sinking of the Grande America that struck Grimaldi earlier this year.

Ro/ro vessel Grande Europa was en route from Salerno to Valencia and about 25 miles from Palma de Mallorca when the vessel was struck by fire during the night of the 15th of May.

The first fire of the night broke out around 00:45 a.m. on deck 3 and was extinguished by the crew itself after about 45 minutes. At 04:00 a.m., however, a second fire occurred on deck 8, which spread to deck 9. Again, the crew promptly intervened with the firefighting equipment on board but the second fire proved harder to extinguish.

The Master of the vessel informed both the Italian and Spanish authorities as well as the headquarters of the Grimaldi Group in Naples of the two fires.

For precautionary reasons, 15 crew members had evacuated the Grande Europa with assistance from a Spanish Coast Guard helicopter which transferred them to the Spanish Navy vessel Martin Posadillo.

Ten crew members remained on board to continue the firefighting operations continued, assisted by a Spanish firefighting tug which had responded to the distress call. At 02:00 p.m. the fire was finally put out and the Grande Europa was assisted by a tug that towed it to the port of Palma de Mallorca, while she still had fully operational engines. The vessel arrived in Palma in the early morning of the 16th of May.

It’s the second large fire on one of Grimaldi’s vessels this year. In March, container/ro-ro vessel Grande America was also hit by a fire, which ultimately resulted in a total loss of the vessel which sank in the Bay of Biscay. The ship’s crew was able to evacuate the vessel in time but had to endure some very scary hours in a lifeboat, which was damaged during the launch and drifted around steerless in rough seas.

A nearby frigate of the British Royal Navy responded to the distress call of the Grande America and rushed to rescue the crew. According to Lieutenant Commander Dave Tetchner, HMS Argyll’s Weapon Engineer Officer, the orange lifeboat was “bobbing around like a cork in a bathtub” in the heavy seas. Tetchner called the rescue a near run thing. “The conditions were on the limit for recovery and this could just as easily been a different result,” he said.

The top management of Grimaldi has expressed its appreciation for the success of the firefighting operations on board the Grande Europa. “In particular, they welcome the fact that there has been no loss of lives and that the risk of environmental damage has been averted,” the company said.

The 21-year old Italian-flagged Grande Europa had 25 crew members on board and was carrying 1,687 vehicles consisting of cars, vans, trucks and excavators, the vast majority of which were brand new, and 49 containers containing mainly food products.

“Preliminary investigations of the Grimaldi Group suggest that the two fires started from two different new vehicles stowed on board, and then spread to the other nearby units,” the Italian shipping company states.

Following the fire, Grimaldi Group has launched an appeal to introduce more stringent rules on sea transport of both rolling units and containers. According to the shipping company, the fire onboard the Grande Europa was “the umpteenth case of a fire that broke out on vehicles transported by cargo vessels.”

“Notably, with reference to rolling freight, the Grimaldi Group requests that there be more controls on car batteries, which often cause short-circuits on board vessels, as well as in port terminals. Moreover, it calls for the total prohibition of the presence of personal effects in second-hand vehicles, embarked on ro/ro vessels,” the company explains its appeal.

Aimed at easing fire fighting operations and limiting risks for the crew, Maersk Line has now appointed specific areas aboard its vessels for the stowage of containers carrying dangerous goods. 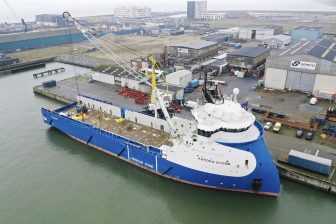 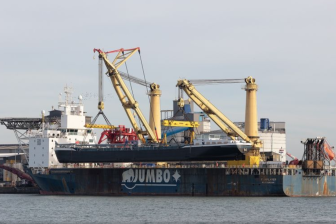 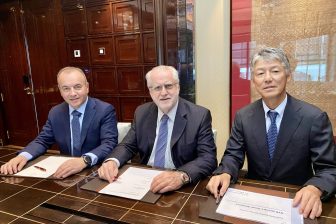