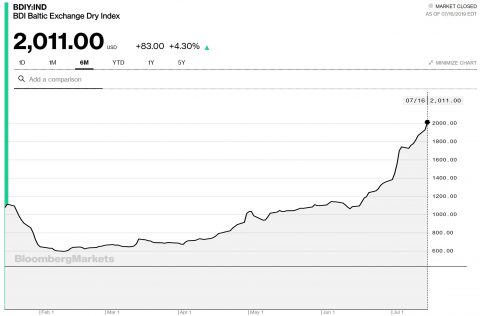 The Baltic Dry Index on Monday reached its highest peak in more than five years. The index grew by 3.4% to 1,928 points, its highest point since January 2014. In the past month, the index has increased sharply following an unexpectedly poor start of the year.

Today, the index has risen even further to 2,011 points, data from Bloomberg shows. The rise of the index is caused by greater demand, mainly driven by Brazil and China. A restart of Vale SA’s Brucutu mine in Brazil in June, which was shut in early February after a tailings dam burst killing more than 240 people, has prompted increased demand from the country, reports Reuters.

The Panamax index rose 47 points, or 2.4%, to 1,992 points, which is its highest since December 2013. Average daily earnings for Panamaxes increased by $383 to $15,919. The tight spot market for Capesize vessels has driven iron ore shippers to book Panamax vessels, driving rates higher, analysts said. The supramax index edged 9 points higher to 888 points.

With the positive development of the Baltic Dry index, optimism has returned to the dry bulk industry but if the multipurpose sector will also benefit remains to be seen. Drewry just last week downgraded its outlook for multipurpose shipping, citing weaker global economic growth, the ongoing trade war and an ageing MPV fleet as the three main reasons that are holding the sector back.

Project cargo demand, however, is expected to provide a boost to the sector during the second half of 2019 as a number of projects get to the cargo-carrying stage. “This section of the fleet is not suffering from overtonnaging and should be able to secure improved forward rates,” senior analyst Susan Oatway said.