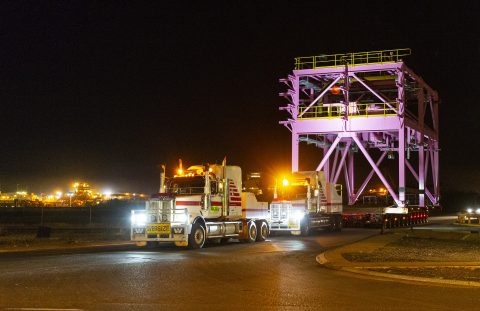 The Trans Global Projects Group (TGP) has delivered 62 bright pink modules to a ming site in Newman, Australia. The mine operator, Roy Hill, encourages all its suppliers to paint their equipment pink in support of breast cancer awareness.

“Over 60,000 freight tonnes of pink cargo – it’s quite a sight and not one heavy lift specialists are used to encountering,” TGP said about its recent delivery.

The company chartered three ocean vessels to carry the 62 modules from Dalian in China to Port Hedland in Australia. After discharging the cargo in Port Hedland, TGP carried the modules 400 kilometres land inwards to the mining site. In total, the modules moved weighed 68,000 freight tonnes with the heaviest lift being 211 tonnes.

The cargo measured up to 15 metres in width and the only available route to the mining site was a single lane highway, which made carrying the oversized load extremely challenging, TGP states. To avoid disrupting the local traffic, the team developed a detailed traffic management plan with local road authorities in Australia.

“We are very proud to have helped our client support such an important cause with the delivery of these pink modules. Thanks to the diligent and tireless efforts of our team, these modules will now help the mine further demonstrate its commitment to breast cancer prevention, diagnosis, treatment and survival,” says Colin Charnock, TGP’s CEO.

The executive chairman of the mine began employing pink mining equipment in 2016, when the entire truck fleet at the iron ore mine was painted pink. Since then, many other equipment pieces have been dipped in the bright hue. In May, Roy Hill took delivery of its seventh pink truck. Earlier this year, in March, the company also took delivery of pink trains.