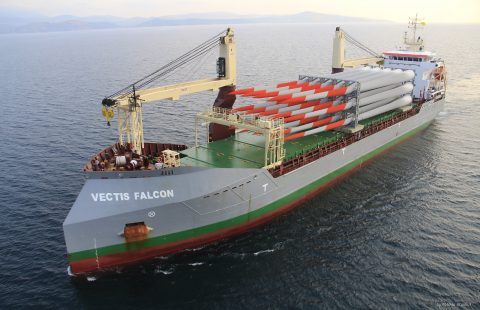 The shipping company, which controls a fleet of general cargo vessels from its base in the Isle of Wight, has just completed ‘DIY’ installations onboard the 8690 dwt Vectis Falcon and Vectis Eagle.

Carisbrooke signed a Ballast Water Treatment frame agreement with Optimarin in 2016, shortly before the Norwegian headquartered specialist became the first supplier in the world to receive full USCG approval for its UV-based Optimarin Ballast System (OBS). Carisbrooke has since completed the installation of six systems, four during scheduled dry dockings and two in a more unconventional way.

“The Vectis ships trade frequently in US waters”, explains captain Simon Merritt, senior fleet manager at Carisbrooke. “Because US compliance dates are earlier than those of IMO, we had to install the systems before the vessels´ next scheduled docking, so we contacted manufacturer Optimarin to discuss alternatives.”

It quickly became apparent that the crew could do it themselves, installing the OBS during scheduled operations, with zero disruption. “The benefits of that were obviously very compelling, so we thought ‘yes, let’s go for it’”, Merritt says.

The project required thorough 3D scanning of the engine room, conducted by Goltens, to provide the measurements that would dictate the positioning of the modular Optimarin BWT unit. Carisbrooke then contacted a Polish manufacturer to make the required piping and foundations.

“We made sure we had crewmembers with the mechanical and electrical competency to take on this kind of project, but it really wasn’t that technically challenging”, says Merrit. “I’d compare it to putting together a giant jigsaw. As long as you have all the pieces you need – and that’s where you have to get the pre-work right – then it’s just a question of focusing on the task at hand.”

By conducting the installation internally expenses were minimal compared to dry dock charges or port installation with third party contractors.

“To put this into context: When we conducted the first installations the costs for the pipework and foundation packages were four times what we paid with our own hand-picked supplier. We paid a grand total of EUR 22,000 for the entire package. A very significant saving.”