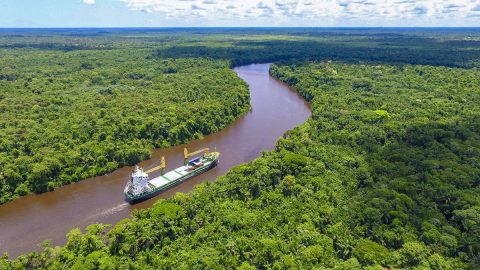 United Heavy Lift and Intermarine team up in North America

United Heavy Lift and Intermarine have teamed up in North America. The German heavy-lift carrier has appointed Intermarine as its exclusive commercial agent for the continent. “Together we are stronger and together we will move forward”, says UHL CEO Lars Bonnesen.

As part of the agreement, Intermarine will promote the commercial maritime business of UHL for cargoes controlled in North America. The operation will be lead by Intermarine’s Director of Chartering Rene Pedersen and focuses on multipurpose and heavy-lift tonnage, including UHL’s newly acquired fleet of nine F900 Ecolift vessels.

Intermarine CEO Richard Seeg says that the representation of UHL will allow the company to offer its customers a “wider scope of services and cargo logistics solutions.” This agreement brings the company a significant increase in tonnage and heavy-lift capabilities, while United Heavy Lift can benefit from Intermarine’s strong network and local expertise in the North American continent.

United Heavy Lift operates a fleet of 16 modern heavy-lift vessels, the majority of which has high lift capabilities of 800 and 900 tonnes. The company also operates three module deck carriers and through its affiliate, United Heavy Transport, has access to five semi-submersible heavy transport vessels. Intermarine operates a fleet of nine vessels with lift capacities of up to 450 tonnes.

“Two successful players in the heavy-lift market are aligning their goals. We are extremely happy to work with Intermarine and Rene Pedersen again; Intermarine has a solid history in the North American market and has built a strong network over the years,” says Bonnesen, adding that he and Pedersen have already worked together for 20 years.

Americas specialist Intermarine was revived as a brand earlier this year after Zeamarine sold its Americas business as part of its insolvency process. The Houston-based shipping company currently operates a fleet of nine vessels on three services between the US and the North, East and West coast of South America.