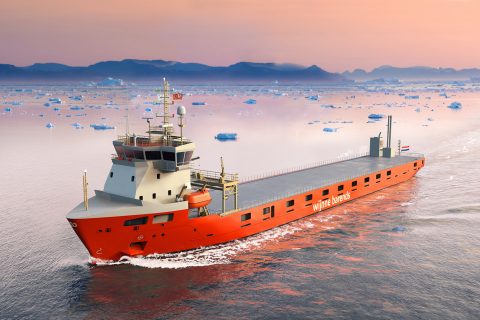 Conoship has designed a new 5,000-6,000 dwt multipurpose vessel for Wijnne Barends as part of a larger newbuilding program of Spliethoff.  The 1A ice-class vessel features a dual-fuel LNG propulsion system and an open-top flush deck to carry project cargo.

As part of this agreement, Spleithoff’s affiliate Bore will build three LNG-powered ro/ro vessels and Wijnne Barends four lift-on/lift-off vessels to transport the UPM’s pulp and other forest products. All seven vessels will be built in China and are scheduled to be delivered in 2021 and 2022. The vessels are time chartered by UPM and will be fully operated by the company’s logistics division.

“The challenge of translating these demands into a feasible design was not an easy task. Especially as there was no existing design of this vessel type running on LNG with the possibility to sail open top. So when the first conversations with Wijnne Barends about this new multipurpose vessel began in 2018, our naval architects were driven to find a suitable solution”, Conoship states.

When the first concept design was finished, there were more uncertainties than certainties, the ship designer says. With the lessons learned while designing the LNG-fuelled trailing suction hopper dredger Ecodelta and through consultations with independent LNG specialists and companies such as Wärtsilä, a working concept design came together in 2019.

The hull shape was optimised by using computational fluid dynamics calculations and the layout of the vessel was adjusted to accommodate the placement of the LNG tank below deck. The superstructure and wheelhouse were placed in front to improve open-top sailing capabilities. After the CFD calculations, the model was successfully tested under the watchful eye of the client.

Upon finishing the basic design, the Chinese WuHu Shipyard has continued with the detailed engineering and the build of the vessels but Conoship will stay involved during the entire process.

Conoship and Wijnne Barends have a long-lasting relationship in the construction and development of coastal vessels. The last of which was the new Lady H series: a series of six ships built in India of which the first two ships have been delivered. The first, Lady Hanneke, was christened in September 2019 at the quay of Wijnne Barends in Delfzijl.

The Lady H series is a 4200-tonne general cargo vessel designed for transporting all kinds of cargo with maximum fuel efficiency, especially in moderate to heavy weather conditions, including sailing in ice. Compared to existing comparable ships in the fleet of Wijnne Barends, an improvement of the stern and more optimal propulsion has improved fuel consumption by an average of fifteen per cent.