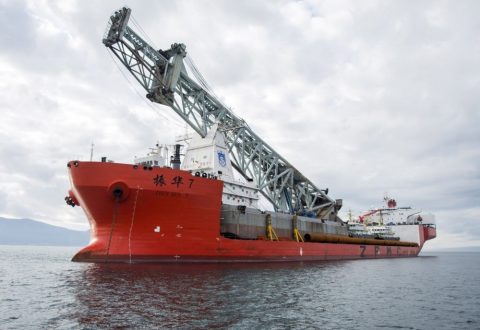 Fourteen crew members of the heavy load carrier Zhen Hua 7 have been kidnapped by pirates while sailing in the Gulf of Guinea, reports maritime security adviser Dryad Global. One of the seafarers suffered a gunshot wound in his leg. This is the 8th offshore incident in just nine days.

Reporting indicates that the Liberian flagged heavy load carrier has been boarded while drifting 78 nautical miles northwest of Sao Tome, resulting in the kidnap of 14 of the 27 crew members. It is understood that the 14 kidnapped crew members are Chinese nationals.

Following the incident, the vessel is currently inbound for Sao Tome, escorted by the Italian Naval vessel Frederico Martinengo.

The Italian navy rushed to aid the Zhen Hua 7 after receiving a distress call. Having established communications, the Martinengo learned that the pirates had escaped and that one of the crew members was in need of medical support, having gunshot wound shot in the leg. The conditions of the injured seafarer were stabilized by the Martinengo’s medical staff and he was then transferred to a hospital in Sao Tome using the frigate’s helicopter. The same frigate had been involved in a similar pirate attack just a few days earlier.

With the confirmation of the latest kidnapping, there is a potential that the rate of incidents will decline in the short term. However, it is not confirmed that the activity over the past 9 days was carried out by a single Pirate Action Group (PAG), and therefore, the risk profile for all vessels operating within the region remains at “critical”, with attacks assessed as highly likely and expected daily.

This incident is the 21st kidnapping within the Gulf of Guinea within 2020 and the total number of crews kidnapped from vessels throughout the area in 2020 is 110.