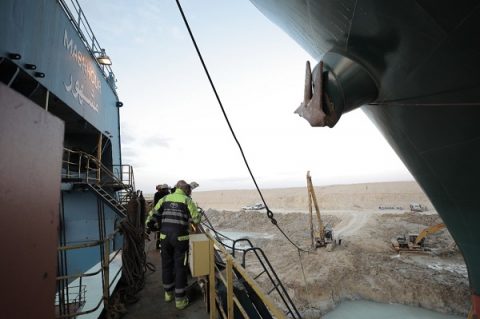 Ever Given’s stern is free but bow remains firmly stuck

The container vessel Ever Given, which has been blocking the Suez Canal, has been refloated again. The vessel is not completely free yet but according to the Suez Canal Authority, the stern of the ship has been turned and is now 102 meters away from the canal bank, instead of just 4 metres prior to refloating.

The vessel was refloated in a series of push and tow manoeuvres. With the help of the towing vessel ALP Guard, which has 285 tonnes of bollard pull, Boskalis was able to turn the stern of the ship after dredgers had freed the Ever Given’s propellers from the mud. At least eleven tugs were needed to get the vessel to move.

While the floatation of the vessel is good news, it is too early to celebrate, says Boskalis’ ceo Peter Berdowski.  The most difficult job is to free the Ever Given’s bow which is stuck like a “whale on the beach” and it will be a hell of a job to slide it over the layer of clay, Berdowksi said in Dutch radio news.

This morning, a second heavy tug arrived at the scene and a new attempt to free the vessel will be carried out later today. The next manoeuvers are planned for 11.30 local time when the tide will reach 2 metres. Water will be sprayed under the vessel with high pressure to wash away the sand and clay.

If it is not possible to free the front of the ship in this way, containers may have to be offloaded from the front of the ship but that would be a “time-consuming job”, Berdowksi says. He hopes it won’t come to that and that the Ever Given will be able to get off the ground by means of pulling force. “There is movement. That’s the good news. But I wouldn’t want to translate the situation that from now on it’s going to be apples-to-apples”, he concludes. This means it is still not clear exactly how long it will take before shipping through the canal will be possible again.

The 400-metre, 224,000-tonne Ever Given ran aground in the Suez Canal on Tuesday 23 March, blocking the important shipping lane between Asia and Europe. The blockage caused a huge traffic jam with vessels waiting on both sides of the canal. According to the Suez Canal Authority, more than 320 vessels, including container ships and oil tankers, were waiting on Sunday afternoon.