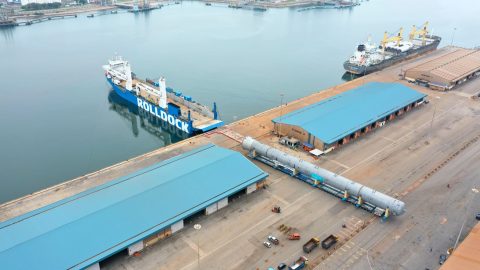 Malaysia’s Kuantan Port has ticked off another major milestone with the loading of a 93-metre long C3 tower onto the Roll Group’s vessel.

The operation was completed nearly two weeks after the tower rolled from the KNM fabrication yard to the quay at the Kuantan Port.

One in more than 10 years for Kuantan Port

According to the port’s Chief Pilot, this is the first time in more than ten years a vessel has been moored perpendicular to the wharf with its stern surface facing the wharf.

To roll the cargo onto the vessel took months of planning and calculations by a team of professionals from Kuantan Port, Roll Group, Worldwide and KNM, among others.

To position the cargo parallel to the vessel, the ground team had to turn the cargo 90-degrees in a very limited space. Then they had to wait for hours until the sea tide was at the desired level to roll the cargo onto the vessel. The overall operation took 6 hours to complete.

The vessel is not on its way to Vietnam’s port city of Vung Tau according to the AIS data.