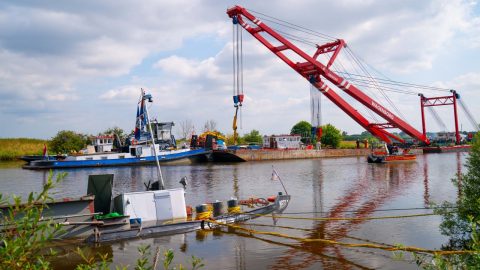 Maritime logistics company Wagenborg recently completed a heavy lift salvage of a vessel sunk in the Weser, near Nienburg, Germany.

The Polish dry cargo vessel, West Oder 1, collided with the Dutch inland vessel Timbo on Sunday, August 7, and subsequently sank. Following the heavy lift salvage operation, the waterway is reopened to traffic after being closed due to the sinking of West Oder 1.

Wagenborg’s scope of work included the inspection of the underwater hull of the West Oder 1 at the beginning of the weekend to prepare a salvage plan. In the meantime the salvage equipment sailed to Germany. Prior to the salvage, Wagenborg performed oil-response actions to prevent possible oil spills. The salvage work started immediately after the arrival of the 300-ton sheerlegs Triton, the support vessel Waterpeil and the crane vessel IJsvogel.

The crane vessel IJsvogel was commissioned by Wagenborg to lighten the ship by unloading the 600 tons of maize. The floating crane Triton and the support vessel Waterpeil were used to refloat the ship. First the engine room was pumped out and then the hold. As soon as there came more water out of the ship than was coming in, the ship started floating again. After this, the ship was made ready to sail again and moored at Nienburg.