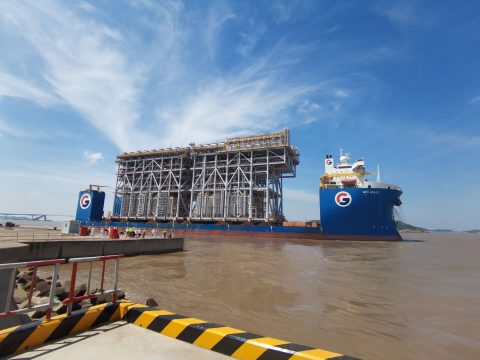 GPO Heavylift has been tasked with transporting Arctic LNG 2 train modules from the Zhoushan yard in China to the project site in the Russian Arctic.

The modules for the first natural gas liquefaction train of the Arctic LNG 2 project, weighing nearly 50,000 tons were built by Wison Offshore & Marine. GPO Heavylift deployed one of its four semisubmersible vessels, GPO Grace for the job. According to the AIS data, the vessel departed the Wison Offshore & Marine yard on August 19 and is currently sailing in the Japan Sea.

The Artci LNG 2 project, led by Russia’s largest independent natural gas producer Novatek, includes the construction of three LNG trains, with a capacity of 6.6 mtpa of LNG each. The total LNG capacity of the three trains will be 19.8 mtpa and about 1.6 mtpa of stable gas condensate.

The project employs an innovative construction concept using gravity-based structures (GBS). The Utrenneye field is the resource base for Arctic LNG 2. The field is located in the Gydan Peninsula in YNAO approximately 70 km across the Ob Bay from Yamal LNG, Novatek’s first Arctic LNG project.