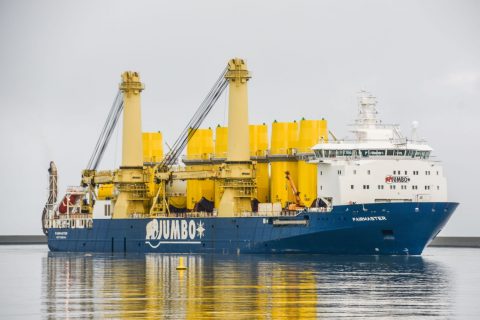 Project cargo deliveries for the Hornsea Two offshore wind farm have been wrapped up by the Jumbo Maritime team, part of the Jumbo-SAL-Alliance. Over the course of 12 months the crews completed a total of 37 trips for the project.

During the period, Jumbo’s vessels delivered a total of 141 monopiles with weights ranging from 775 to 1285 tons and diameters ranging from 8.3 metres up to 9.5 metres. The crews also delivered 131 transition pieces weighing 345 tons each with a 6.5 metre diameter. 60 crew in total, over 20 shore staff, and 3 port captains were all closely involved with this project, Jumbo Maritime said in its statement via social media.

The last delivery was completed by the crew onboard the Fairmaster, one of the two vessels from the K-class family, fitted with two 1,500-ton crane with a combined lift capacity of 3,000 tons.

Every sailing for the duration of the project was run on biofuel, helping to reduce the company’s environmental footprint, Jumbo Maritime said.

Located in the North Sea some 89 km off the Yorkshire Coast, Hornsea Two spans an offshore area of 462 square kilometres and will be the world’s largest wind farm when it goes into operation in 2022. With capacity of 1.4 GW, the farm will provide power to more than 1.3 million homes in the United Kingdom.