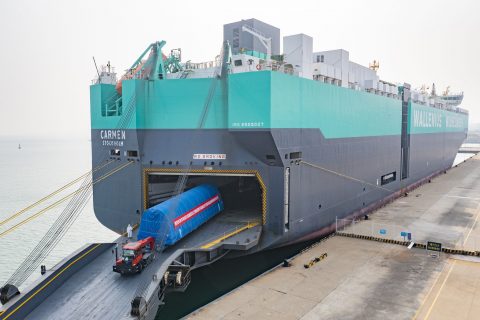 Wallenius Wilhelmsen has loaded the first shipment on Monday of Airbus Aircraft components under the new deal signed with Airbus and partner Louis Dreyfus Freight Solutions. The aircraft components were loaded at the Dailan port in China.

The company carried out the loading operation with the Liaoning Port Co and its partner Louis Dreyfus Freight Solutions, a unit of Louis Dreyfus Armateurs Group. To remind, the multi-year contract will see the pair deliver 220 components from the production plant in Shenyang, China to the final assembly plant in Mirabel, Canada.

Wallenius Wilhelmsen further noted in its brief statement through its social media channels that this is the first liner service connecting Dalian and North America, used to deliver high-value aircraft components, as well as other products in this trade lane.

Wallenius Wilhelmsen and Louis Dreyfus Freight Solutions are partnering for both land and maritime transport. This collaboration offers optimal management of transport conditions, guaranteeing Airbus Canada regularity in supplying the Canadian assembly plant at Mirabel. The solution will provide Airbus with end-to-end visibility on their cargo as it moves through the supply chain, allowing them to better plan their operations.

The logistics plan includes a segment of land transport from the production plant in Shenyang to the port of Dalian, a crossing of the Pacific Ocean by sea through the Panama Canal to reach the East coast of the United States. This is followed by a second segment of land transport from the port of Baltimore – where Wallenius Wilhelmsen operates its own terminal activity and several processing facilities – to the assembly plant in Mirabel, Canada. This nominal solution offers transport in 48 or 50 days with two sailings per month providing an improved end-to-end logistics with a reduced carbon footprint.