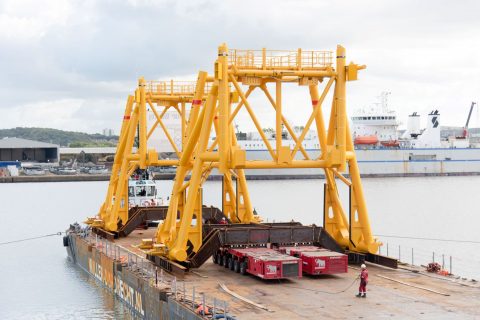 The yellow giants have been transported by barge and will be used to support the heavy lifting operations of the tunnel heads of Hinkley Point C’s water cooling system as they are placed on the seabed of the Bristol Channel.

Hinkley Point C is a nuclear power plant under construction which will provide low-carbon electricity for around six million homes in the United Kingdom. It is the first new nuclear power station to be built in the UK in over 20 years.

The facility will also be the first in a new generation of nuclear power stations in the UK. The planned twin unit UK EPR is capable of generating 3,260 MW of secure, low carbon electricity for 60 years.

Balfour Beatty is contracted to three major packages of works at Hinkley Point C. It was first appointed to deliver the electrical package in a joint venture in 2015, the tunneling and marine package in 2017 and the 400kV overhead line project on behalf of National Grid in 2019.