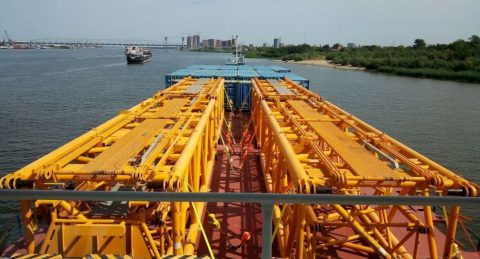 Volga Shipping Company gets busy with project cargo in 2021

Volga Shipping Company, together with its unit, Volgo-Baltic Logistics, has racked up a total of 17 oversize and project cargo deliveries in 2021. During the period, the company transported project cargo between Europe and ports based in the Baltic and Caspian Seas, to the ports on the Volga and Kama rivers, from Turkey to the ports of the White Sea.

In particular, Volga Shipping completed six shipments from Europe to Azerbaijan and Kazakhstan of equipment intended for the development of the offshore oil and gas fields; three voyages for transportation of cargoes for the petrochemical industry of the Central and Volga federal districts; two voyages with cargo for the construction of an LNG terminal in the Murmansk region.

Each project was preceded by several months of systematic work. At the initial stage the shipping company and its logistics operator carried out marketing research, an express analysis of the possibility and feasibility of each transportation contract with the involvement of specialised structures, solved what type of ship is optimal for a specific task. In the process of preparation, Volga Shipping made engineering calculations, developed several transportation solutions, cargo placement on board and its fastening, as well as solutions for oversize equipment loading / unloading.

Thanks to such an integrated approach, Volga Shipping Company in the summer navigation of 2021 was able to successfully complete a round voyage for the project cargo delivery with loading in both ends.

MV Rusich-11 does a round trip

For example, in early June Volga Shipping was contracted to deliver a cargo of industrial equipment for an oil production enterprise in the Caspian region from the Norwegian port of Drammen. The cargo was transported by the MV Rusich-11 and in early July was delivered to the Port of Baku, Azerbaijan.

After unloading, the mixed river-sea class dry cargo ship made a short transit to the Kazakhstan’s Port of Bautino, to take on board the components of a crawler crane. Leaving the port of loading at the end of August, the ship passed the Lower Volga and the Don River, proceeded to the Sea of ​​Azov and made a sea voyage through the Black and Mediterranean Seas, the Atlantic Ocean and the North Sea to the destination point for unloading – the Scottish Port of Methil. In total, MV Rusich-11 covered more than 12000 nautical miles on this return-loading voyage.

During this year, sea-going vessels and mixed rive-sea class vessels of Volga Shipping Company carried a total of some 11,000 tonnes of project cargo. The vessels involved in the transportation project included: RSD49 series of Neva-Leader type, of DCV36 series, Amethyst type, of the 00101 Rusich and 01010 Valdai types, together with the non-self-propelled sea-going deck cargo barge of Volgo-Baltika type.

It should be noted that the transportation of project and oversize cargo is one of the priority areas of sustainable business development of Volga Shipping Company in the segment of inland and mixed river-sea freight traffic. In the 2022 shipping season, the company plans to develop and implement new transportation and logistics projects.