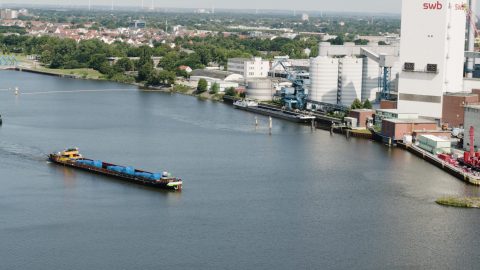 UTC Overseas offices in Bremen, Germany, and Helsinki, Finland recently completed a large multimodal delivery of nine oversized, overweight gensets to a new power plant in Bremen. Working with a long-time client, planning for the multimodal project began a year in advance.

The shipment consisted of nine gensets, each weighing 185 tons and measuring 14.5 metres x 4.2 metres x 5.05 metres. A power plant in Bremen was converting from coal to gas by installing gas drives. The transfer to a more sustainable energy source will move the plant closer to meeting its environmental targets and help the state and city of Bremen achieve its goal of decreasing emissions up to 75 percent.

The journey began in Vaasa, Finland, where the cargo was loaded onto the MV Travetal for on-carriage to the port in Bremen. Sequencing was critical from start to finish as each unit had a serial number and had to be placed in the proper order as they were secured and readied for departure. The 185-ton units were delivered to Bremen-Neustadter Hafen, where they were stored for a few days and then transferred to three barges for the last leg of the trip down the Weser River.

Upon arrival of the barges, the gensets were offloaded at the site-owned pier, which had been evaluated and subsequently reinforced. Due to rising water levels, the power plant was elevated and surrounded by a flood protection wall and a ramp with a 6 percent incline, which made the final part of the transport more difficult. The units were hoisted by two 500-ton cranes that transferred the Gensets onto a 12 axle SPMT (self-propelled modular transporter) waiting on the ramp in a leveled position, driven up to the powerhouse, and moved into each motor cell for setting on the foundation.

The 185-ton gensets had to be lowered onto the foundation and carefully aligned within millimetres of the required specifications, by a new and unique lifting system that was developed and designed in conjunction with UTC partner Riga.

“The job at the plant, from start to finish, was originally estimated to take nine days. With advanced planning and mapping of proper procedures, it was completed in 6 days. This allowed our client to begin installing additional modules, pipes, and other equipment earlier than expected,” stated Sven Binder, UTC General Manager Projects.