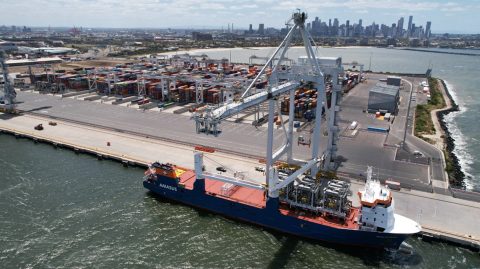 The ACCs expanded VICT’s fleet to a total of 17 units. The fleet expansion further enhances container movement between automated ship-to-shore- cranes on the terminal’s quay side and auto stacking cranes on the land side.

The new ACCs form part of VICT’s AUD139 million investment into Webb Dock and the Victorian economy over the next two years, which complement the Port of Melbourne’s investment to remove the “knuckle” and add another 71 meters of quay line to berth 4 of Webb Dock East.

Eemslift Dafne departed Antwerp at the star of October and headed towards the Port of Melbourne. It made a stop at Colombo, Sri Lanka and Port Adelaide before reaching the Port of Melbourne at the end of November. The vessel taking the ACCs on this almost two-month journey is geared up to 300 tons with two 150-ton cranes. The 11-metre long vessel was built in 2014.