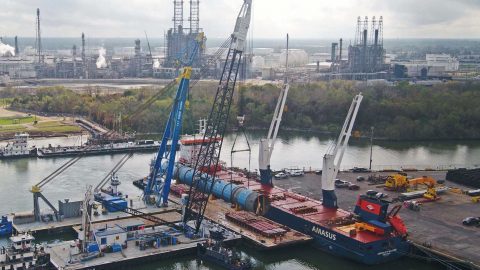 The Noatum Project Cargo team has managed the delivery of reactors from Schwartz-Hautmont Construcciones Metálicas destined for a new alkylate production facility in Pasadena, Texas.

This structure was composed by seven columns, the biggest one measuring 60.5 metres long with weight over 440 tonnes.

As a part of its integral services, Noatum Project Cargo team handled planning, coordination and performance of this operation, all very important towards the safe delivery of such cargo.

The company hired the 2014-built Eemslift Nadine. The vessel have a deadweight of 4,200 metric tons and on-board cranes with a combined lifting capacity of up to 300 metric tons. Since September 2021, Eemslift Nadine, together with its sister vessel Eemslift Dafne, is operating in the dship Carriers’ fleet. With the addition, dship Carriers expanded its service portfolio to tackle the tighter space availability in the market.

According to the vessel’s AIS data, the reactors have been loaded at the Spanish Port of Algeciras and delivered and unloaded at the Gulf Stream Marine terminal in Texas. The vessel is currently sailing in the North Atlantic with the course set for the Port of Hamburg in Germany.