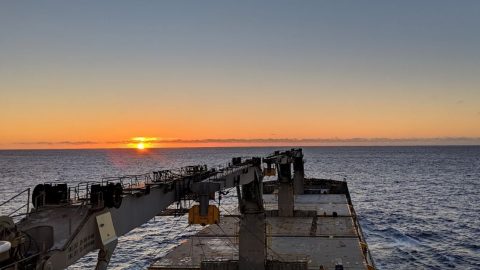 Following in the footsteps of The Coca-Cola Company and likes of Walmart, Home Depot and Ikea, coffee industry has turned to breakbulk vessels to ship supplies to the United States. As Bloomberg reports, a breakbulk vessel named Eagle has set off from Lampung in Sumatra and is heading for New Orleans.

According to the vessel’s AIS data, it is sailing in the North Atlantic Ocean after winding its way through the Mediterranean, and is just off the coast of The Bahamas. The vessel is transporting robusta coffee bags stacked in its hold for supply-starved roasters in the United States. The experiment has come about as coffee producers, roasters and traders are looking to bridge the global container shortage that is causing a major backlog.

Speaking to Bloomberg, Manish Dhawan, senior vice president for coffee trading company Olam Food Ingredients, said, “At the point when we were seeing shipments getting delayed, customers really struggling to get their supplies in time and getting access to coffee, that’s when we started to look at it.” Olam Food Ingredients is the company that chartered the Eagle for its delivery.

However, it is not the first time such a shipment has been done. Dhawan noted that it has been carried out in the late 80s or early 90s, but the latest shipment is certainly a new frontier for the company. Several factors, including the high price or limited availability of containers for coffee shipping, have pushed industry players to turn to old-school shipping without containers. Eagle has already completed a similar delivery of arabica coffee from Brazil to Bremen in Germany.

And the Santos Port in Brazil is dispatching a number of other breakbulk vessels to Europe. World’s top arabica cooperative Cooxupe has already shipped 108,000 bags of coffee to Europe on a vessel in early December. The company’s commercial director Lucio Dias told Bloomberg two more similar shipments are scheduled for January.

“We made an experiment as some clients have been adjusting to this new shipping modality to solve shipments bottlenecks,” Dias said in a telephone interview. “But it’s a complex operation.”

Dias added that shipping coffee the old-school way comes with its set of challenges, as some ports are equipped to lift bags from vessel’s hold while others are not. Cooxupe’s first loading operation was extended to five days from the planned two due to rain and such delays can also affect costs of these shipments.

With Dias expecting the logistic bottlenecks to continue at least in the first six months of the year, many are looking to breakbulk vessels as a means to alleviate the bottlenecks in regions such as Vietnam, the biggest producer of robusta coffee.

Provided really good information by them, so the shipping can be done by air or by sea, every company choose their way what they like.
There are alot of package forwarding companies that do shipping both ways like by sea and by air, Like Global Shopaholics, MyUS, Shipitto.