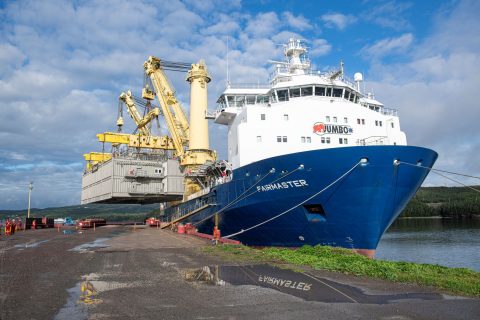 Jumbo ships modules for Kiewit from Canada to Texas

The Fairmaster and her crew first mobilised in Rotterdam, the Netherlands before sailing to Marystown, Canada where all cargo items were loaded, carefully stowed and shipped to Ingleside, Texas for discharge.

Transporting the cargo in a single voyage

Jumbo Shipping faced a challenge of transporting the offshore modules, fully assembled and on a single voyage.

“Specific studies were made for the deck strength and the tight lifting operations,” says Jumbo’s project manager, Maarten De Gruyter.

Due to the weight and size of the living quarters module, Kiewit was initially looking to ship all their cargo via a RoRo vessel or a deck carrier. However, they were not keen on exposing their cargo to all the weather elements while at sea. The team convinced the client through the use of a 3D simulation, stowage plan and detailed engineering that all their cargo could fit securely onboard Jumbo’s HLV while staying inside the ship’s parameters.

Some of the cargo could be stowed below deck protecting it from the weather. The cargo secured on deck would be exposed to minimal elements and acceleration forces at sea, and further cost-reduction was ensured since the lifting would be executed by use of the vessel’s own two 1,500 tonne capacity cranes.

In the lead-up to the project, the technical teams were busy developing a complete logistics solution for the client including engineering, risk assessments, approvals, complete project management and logistics planning.

“The lifting of these modules in between the ship’s two cranes safely was a difficult engineering challenge,” says lead engineer, Mark Tetteroo-Pat.

To meet the required deck space, the crew extended the Fairmaster’s deck with the use of the ship’s tween decks. All the loading checks were performed in 3D and when on site the actual clearances were spot on.

The Fairmaster and crew first loaded the flare boom weighing 145 tons and other project cargo items, securing them below deck in the hold. When the hatches were closed up, the crew lifted the bigger pieces using both 1,500 ton capacity cranes. First, the Helideck was loaded on the vessel’s forward deck and then the 144 person living quarters module weighing 1293 tons and measuring 53x24x18 metres was delicately manoeuvred between the pedestals of both cranes. After loading the living quarters module, two cargo items were also loaded on the aft deck of the vessel.

Once the three large pieces and smaller ancillary equipment were all safely loaded on board, the crew set sail to Ingleside, Texas, where all the cargo items were carefully discharged.