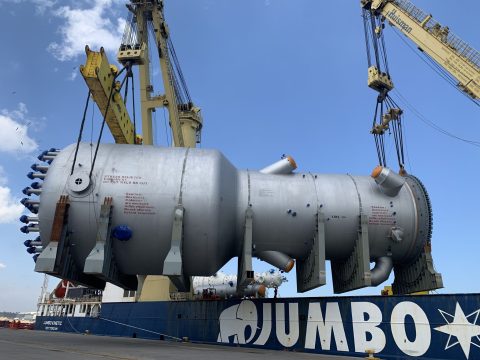 Jumbo Kinetic, the heavy lift vessel operating in the Jumbo-SAL-Alliance fleet has notched up a new heavyweight highlight. The vessel was recently charged with the shipment of multiple cargoes including the heaviest piece to date for a new refinery under construction in Dos Bocas, Mexico, by the alliance’s client, Mammoet.

Jumbo Kinetic’s cranes loaded a regenerator weighing in at 1,850 tonnes, marking the second heaviest cargo piece ever loaded by the vessel’s two cranes. The equipment, including a reactor, regenerator and stabiliser, was first lifted and loaded in Masan and Ulsan, South Korea, before the crew sailed with a full deck to the discharge port of Dos Bocas.

At Dos Bocas, the crew faced some environmental challenges during offloading operations due to swell. During the discharge of the heaviest cargo the Minister of Energy in Mexico and his team visited the project site.

At the same time the Jumbo Kinetic was in Dos Bocas, the Jumbo Jubilee was also there. Once operations were complete, both vessels sailed via the Panama Canal in transit to Asia. The Jumbo Kinetic is currently loading cargo for another client in Vietnam and will return again to Dos Bocas with more equipment for the refinery.

Jumbo Jubilee is currently moored at the port of Mokpo in South Korea.