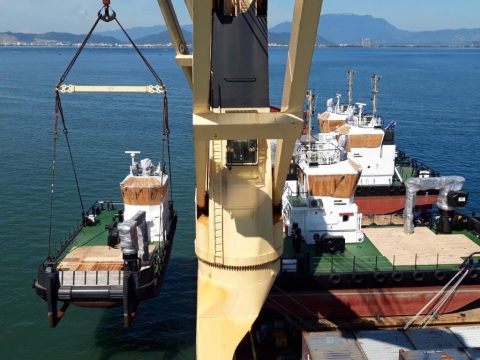 The MultiCats 1908 were transported aboard the BBC Danube, a general cargo vessel from the UK BBC Chartering company. Built in 2012, it measures 143 metres in length, with a 23-metre beam, and a gross tonnage of 12980 tonnes.

The four MultiCats were manufactured at Song Thu Shipyard in Vietnam, run by Song Thu One-member Limited Liability Company, a Partner yard of Damen Technical Corporation. The 10 hectares of Song Thu Shipyard are located just Southeast of Da Nang city, a transportation hub. The shipyard has the most modern electro-mechanic Ship-lift system in Vietnam and is second in Asia behind Singapore.

The twin propelled MultiCat 1908 is designed to operate in coastal waters and in harbours. The main deck is fitted with a dayroom and toilet, and the raised wheelhouse ensures a proper overview. Its dimensions are 18.9 metres in length, with an 8.1 metres beam and a 2.1 metres draught max. Performance-wise, the MultiCat 1908 has a bollard pull of 13.5 tonnes and can reach a speed of 9 knots.