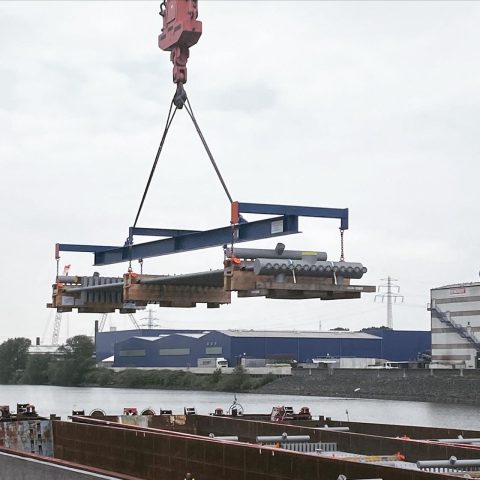 The Bremen-based company, 7 Worldwide Logistics (7WL) has handled a large FOB shipment of industrial equipment, from Berlin to Hamburg.

The shipment was conducted on behalf of a leading producer of pressure vessels, heat exchangers and compressors. It consisted of 48 Secondary Line Exchangers, 4 USX Units, as well as several Lifting Devices. Some spare parts were also included. In total, the volume of the shipment is estimated at 5200 cubic metres (CBM), and the weight at 957 metric tonnes.

The equipment was first transported via barge, via the Elbe and its connecting waterways, from the manufacturing yard in Berlin, to the Wallmann Terminal in Hamburg. A total of 6 barges were needed, and the loading process took 3 days.

Upon arrival in Hamburg, the six barges were unloaded using two port cranes operating simultaneously, which took one day. This handling of the units was overseen by the 7WL team and their customer.

The cargo was then loaded onto the general cargo ship, the AAL Brisbane, which has a carrying capacity is 32306 t DWT and a 9.6 metres draught. It measures 193.84 metres in length, and 29.39 metres in width. The ship and its cargo are now headed to India.