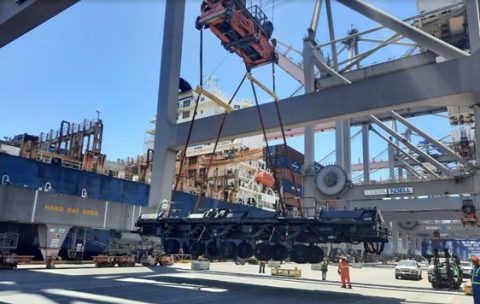 The American container shipping company, APL shipping, a subsidiary of French shipping company CMA CGM, handled the transportation of two 60k aircraft loaders. The cargo was transported via containership from Korea to California.

The two 60K aircraft cargo loader/transporter can load six pallets of cargo into an aircraft at a speed of up to 23 miles per hour. The deck height can be adjusted from 0,9 metres to 5,6 metres, thanks to hydraulics. The width can also be adjusted from 4,3 metres during operations, to 2,7 metres during transport. The length is fixed at 150 metres. Each has a maximum payload of 60,000 pounds, or 27 tonnes, and weighs 65,000 pounds, or almost 30 tonnes.

The cargo loaders were transported aboard the containership President Truman, which flies under the flag of the United States. Built in 2014, the ship has a gross tonnage of 75015 tonnes, an overall length of 299.9 metres, and a width of 40,06 metres. The ship was loaded in the Korean Port of Busan, to the US Port of Los Angeles, California. There, they were unloaded using the largest STS crane in the LA harbour.