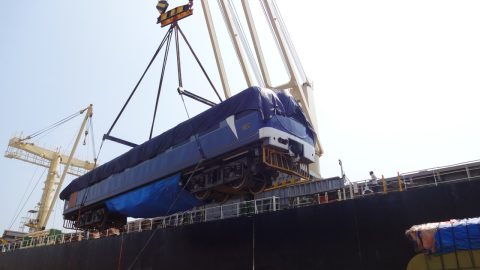 Logistic Integrators (LIPL) has recently wrapped up, what it called a niche project, moving railway wagons from Hyderabad to Chennai Port and further to Kota Kinabalu, Malaysia. The three units each measured over 20 metres in length and has a weight of 40.5 tons each.

The wagons were manufactured in Hyderabad and were shipped as breakbulk. Wagons were relatively over-length and heavy, requiring a lot more precise planning than the average logistic effort for movement through the manufacturer’s remote area. LIPL was also concerned with narrow roads with smaller turning radius for over-length wagons for movement.

LIPL project team was also involved in civil work, starting from obtaining the permission from the manufacturer to make structural changes at the facility, which was required to move the wagons out of it. A complete factory wall was demolished just to gain a turning radius for multi-axels and also to avoid getting electrocuted by a live transformer which was very closely placed at the manufacturer gate, the company noted.

Special permission was acquired from the Road Transport Division, the Municipal Division, and the hiring of Police Escorts and locals to ensure smooth transport of wagons throughout the route from Hyderabad to Chennai Port. The project execution movement was based on complete planning in terms of identifying the safe logistic route and always adhering to QHSSE.