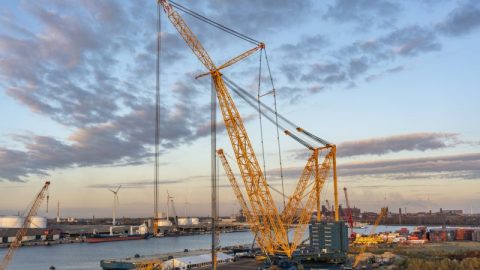 Recently, crane company Sarens presented the SGC-250, the largest tower crane in the world in terms of both size and capacity, at Ghent’s Kluizendok port area.

This crane weighs 8,000 tonnes, has a lifting capacity of 5,000 tonnes and will be used in difficult and complex construction projects, especially in the energy sector. At a height of 100 metres, the SGC-250 is still capable of carrying loads up to 2000 tonnes. Fully extended, the crane reaches a height of 250 metres. It can slew 360 degrees and has a working radius of 275 metres. Through the use of, among other things, spreader mats, its ground pressure never exceeds 25 tonnes per m³. The crane is powered by twelve linked engines.

After having been inspected in Ghent, the crane will be disassembled and transported to England by ship. As of April 2019, it will be deployed at the new nuclear power plant in Hinckley Point. The lease contract spans four years. Sarens expects that the SGC-250 will also need to be used for the construction of other planned nuclear power plant buildings in Britain.

The assembly of the crane in Ghent took no less than six months. Subsequent assemblies will be quicker; given the precise nature of the work involved, this will still take six to eight weeks though.