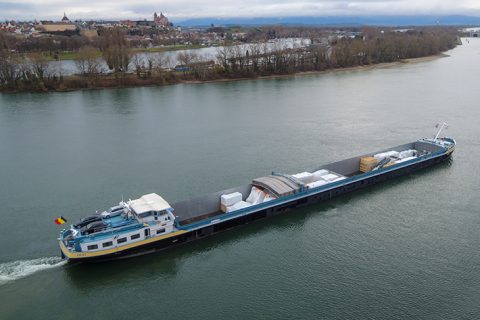 Liebherr-Mining Equipment in Colmar has booked huge CO2-savings by shifting its pre-haulage from the roads to the rivers. The company began a pilot project mid-2019 and has since shipped 148 machines divided over 60 barges. The result is savings of 800,000 km on the road and 868,000 tonnes of CO2.

Before the inland shipping pilot, the company needed about a 1,000 trucks a year to transport its mining machines to the Belgian seaports to join mine sites around the world in for example Australia, Africa or Asia.  Wanting to improve its environmental footprint, the company challenged itself in June 2019 to shift its pre-haulage to the seaports from road to river.

After 18 months of experimentation, Liebherr-Mining is happy with the results it booked and has now decided to continue its pre-haulage by barge from here on.

The pilot project followed an in-depth study into the modal shift, which was co-financed (50%) by France’s inland waterway association Voies Navigables de France Strasbourg (VNF). This funding is part of a VNF-project which is intended to support companies wishing to move to river transport. With the study showing favourable results, Liebherr-Mining decided to pull the trigger.

Having been situated in Colmar for almost 60 years, the manufacturer wanted to work with local companies. Liebherr contracted the Alsatian carriers Straumann (Colmar) and Wack (Obernai and Drulingen) to execute the pre-haulage from the factory to the Rhine port, with barging company Haeger & Schmidt Logistics providing the actual water transport.

During 18 months of experimentation, Liebherr-Mining Equipment Colmar shipped 148 machines which correspond to 1,600 packages or 27,000 tonnes. 60 barge shipments were needed to transport the equipment to the seaports of Antwerp and Zeebrugge.

“In addition to the 868,000 tonnes of CO2, the company also reduced road traffic as well as noise pollution as river transport is the quietest mode of transport”, the company states.

The shift also brought along other desirable savings, like time and money. A machine ready for dispatch on Friday morning can be in Antwerp or Zeebrugge on Monday morning. “A major advantage over road transport because a barge even navigates on Sundays”, Liebherr-Mining says.

The manufacturer states that if the flow is industrialized and a company commits to a forecast volume, river transport is also a less expensive solution.

“The pre-haulage success of the mining division has opened up a new path in the Liebherr Group. Other factories in the group are now studying the possibility of following the same path”, the company concludes.