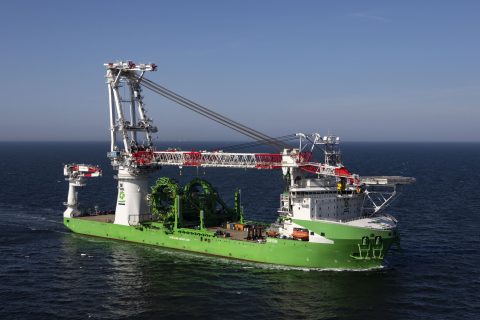 A vessel that has had a turbulent couple of years, DEME’s installation giant Orion, is set to start its first job, but only after the naming ceremony is complete.

DEME said that the offshore installation vessel Orion sailed out from Bremerhaven and docked for the first time at its base near Vlissingen. Equipped with its powerful, 5,000-tonne crane and a unique Motion Compensated Pile Gripper this gentle giant is designed to handle the next generation of wind farm components.

Very few vessels have had a such a journey during construction. In May 2020, during load tests the 5,000-tonne heavy-lift crane of the Orion collapsed at Liebherr’s construction yard in Rostock. The vessel sustained significant damage with 12 people sustaining minor injuries.

Liebherr soon followed with a statement saying that the culprit for the accident was the hook designed by and purchased from an external supplier, Ropeblock. Months after the incident, the vessel moved to the Gdańsk Remontowa Shiprepair yard in Poland that was contracted to replace over 200 tons of steel on the stricken vessel.

Following the repair completion, DEME turned to Huisman to upgrade the installation tools onboard DEME’s fuelled offshore installation vessel. Huisman has been contracted to deliver a 2,300 mt lifting spreader and a set of adaptive damping tugger winches. Huisman and DEME have worked together on the optimisation of the spreader’s design in order to increase safety and efficiency of monopile installation.

During late March and up to mid-April, the vessel has undergone a number of sea trials according to the shipping data. Following the naming ceremony it will be ready to kick off its installation campaign.

It was initially booked to serve the Moray East wind farm, however, following the incident, the job has been transferred to Seajack’s installation vessel Scylla. In January last year, DEME Offshore has been awarded contract for the foundations at Parkwind’s Arcadis Ost I offshore wind farm. The next-generation XXL monopiles will be the largest ever installed in Europe with a weight of around 2,000 tonnes each. The company then informed it will deploy Orion for the job.

The installation campaign is planned to start before the summer 2022. Arcadis Ost I is scheduled to be fully commissioned in 2023.