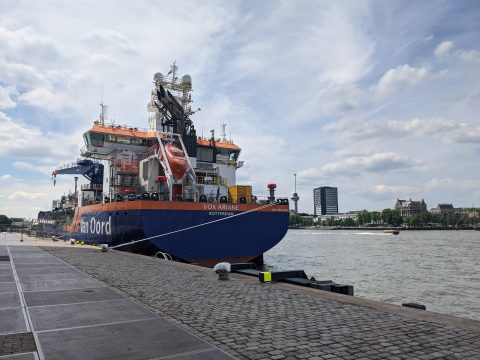 This newest addition to the Van Oord fleet was constructed at Keppel ShipYards, in the west of Singapore. After being picked up by Captain Jort de Jong, five weeks ago in Oman, the trailing suction hopper dredger (TSHD) sailed to Rotterdam, where it was moored to the Wilhelmina Quay from June 2nd to June 4th, 2022.

After three days of events, it left Rotterdam, and arrived in Moerdijk where it is undergoing one last set of tests before its first mission: reclaiming a beach in England. With a maximum draught of 9.80 metres, and a gross tonnage of 11910t, Marjolein Boer, head of communications for Van Oord, described the ship as optimally suited for such coastal protection projects. “We’re getting these jobs more and more often because of climate change.” The ship is also suitable for port construction, waterway deepening  and land reclamation.

The Vox Ariane is the sixth dredger delivered by Keppel Shipyards, but the first dual-fuel  trailing suction hopper dredger built in the city-state. Indeed, special attention was paid by Van Oord, to sustainable innovation, during the design of the vessel in 2018. Indeed, the marine contractor intends to become carbon-neutral by the year 2050, in line with the December 2015 Paris Agreement.

One of several decisions made to improve on sustainability, was the choice of Liquified Natural Gas (LNG) as one of the two fuels, for the 138-metre-long and 28-metre-wide ship. The LNG is stored in two imposing tanks on the deck, which have a textured exterior to increase their insulating properties. Indeed, LNG is cooled to approximately -161.5° Celsius. The TSHD can last about two weeks on full LNG tanks and three weeks on traditional fuel. It is the first working vessel to sail on LNG, in a series of three dredgers to be built over the next 25 years. These sister ships will be the Vox Alexia, named after the Dutch Princess, and the Vox Apolonia. 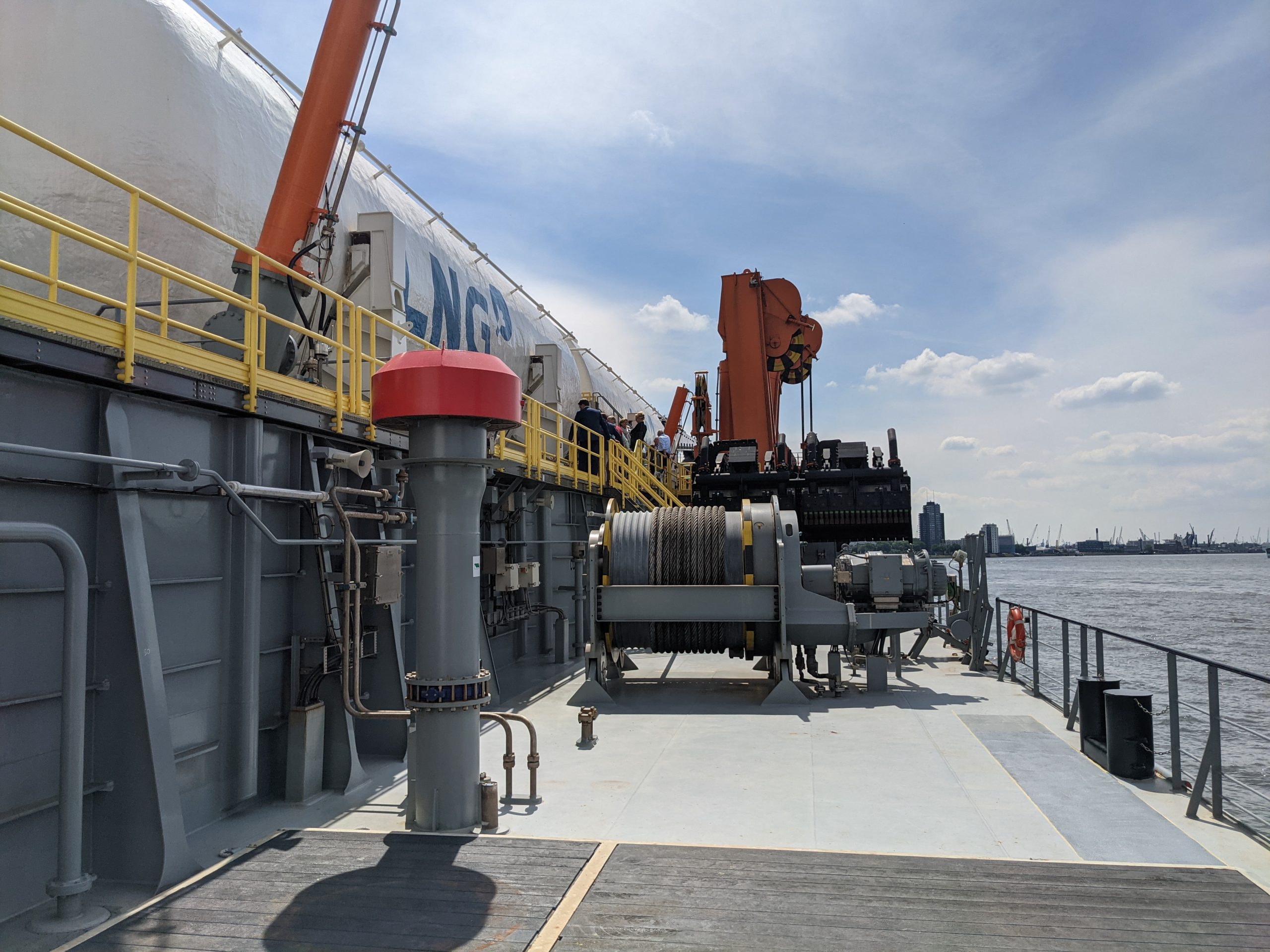 When the ship design was first conceived, LNG was the best available green option. “Now, of course, we see that slightly differently. Also because LNG is becoming less and less available due to the gas crisis,” says Boer. As a result, Van Oord has opted to use methanol as a fuel for their next generation of ship, the jack-up vessel Boreas, which will enter service in 2024. “The Vox Ariane was conceived five years ago, and construction began in May of 2019. “The ships we are ordering now are cleaner and cleaner,” says Rachel Terry, head of sustainability. “We are not waiting for the industry. We are making the choices now that seem best to us for the future.”

Other sustainable choices, implemented in the Vox Ariane’s design include a shore power connection. “With this choice alone, the carbon footprint of our vessels is reduced by 15%”, says Terry.

Also, “The dredge pump does its work underwater, which you don’t see on most hoppers. It’s an energy-saving innovation.” explains Maarten Sanders, manager of new construction at Van Oord. “By installing the pump underwater, it is close to the seabed and therefore requires less energy to suck up sand.” The draghead also ensures that the sediment is loosened, as it trails along the seafloor, for even greater energy economy regarding the pump. Once the ship is in position to unload the sediment, parallel discharging using rainbow nozzles increases efficiency, both in terms of time and energy.

Another innovation is the optimised hull design, with a shallow draft, straight bow, and absence of seawater ballast tanks. “This ship was designed for the next generations. The vision we had years ago was for the new trailing suction hopper dredger to be as sustainable as possible,” says Sanders. “And the more sustainable, the more competitive the ship. So the hull was designed to be as efficient as possible and the most modern systems were installed. In doing so, we also looked at ways to reduce the number of crew members.”

The ship can accommodate a crew of 22, and the integrated bridge system, combined with the dynamic positioning and tracking systems, informed by a multitude of sensors, allows for a high level of automation, increasing energy efficiency. The emphasis now put on such automation marks a shift away from the hyper independence of crews, and towards a centralisation of command and control, in land-based headquarters. 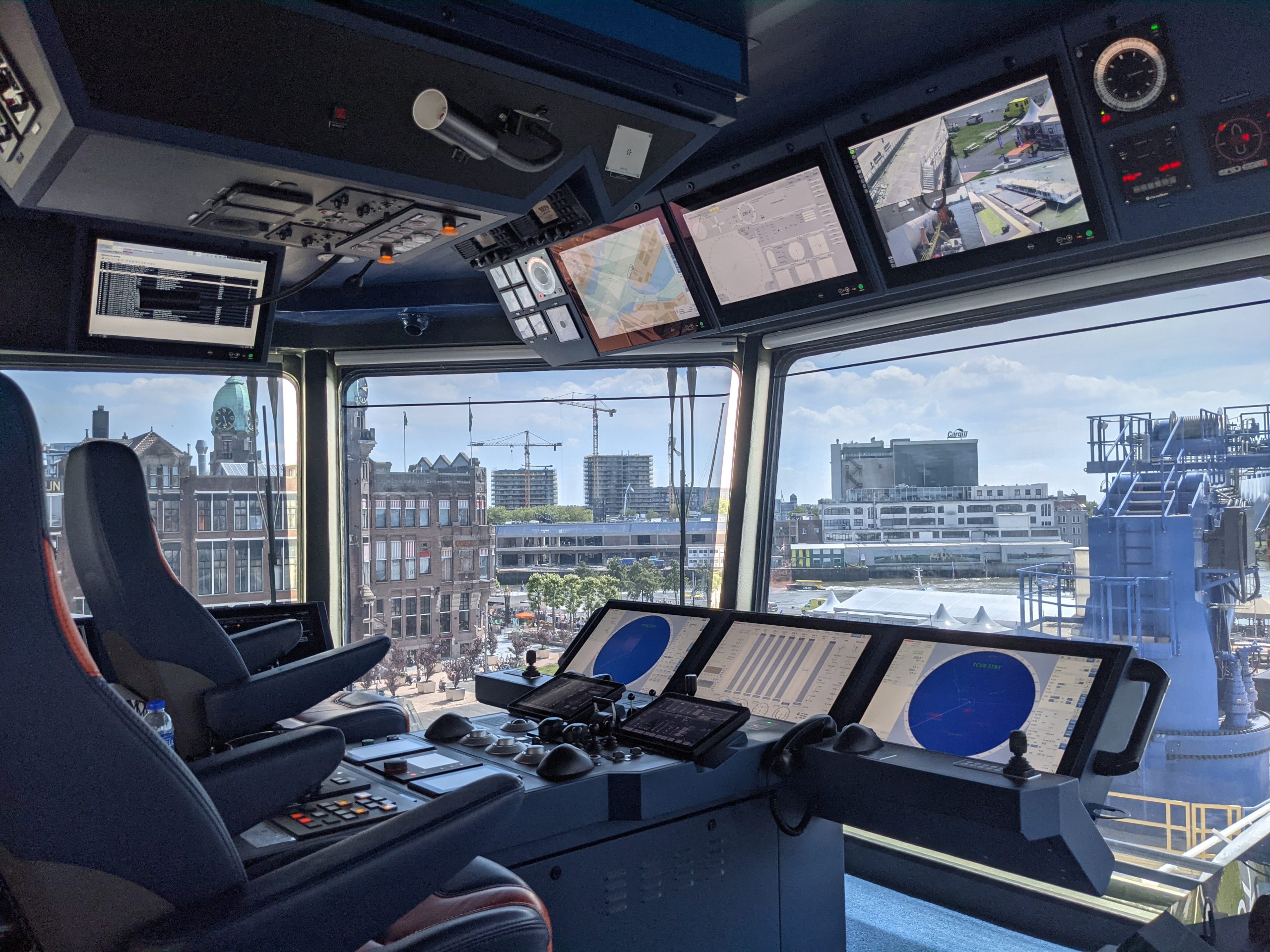 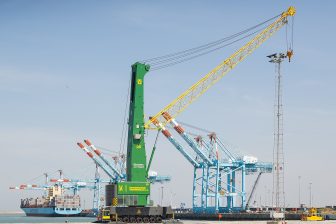 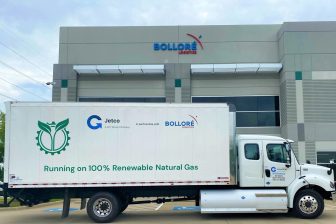 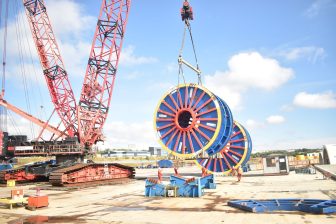