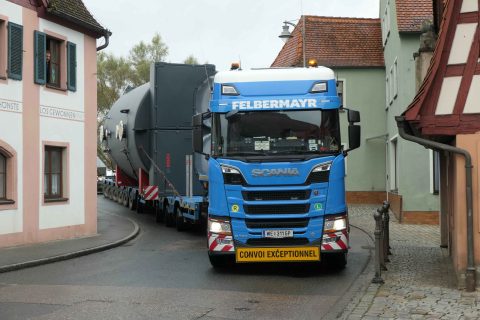 The Felbermayr branch in Nuremberg, in cooperation with Haeger & Schmidt and Felbermayr Austria, recently handled the special transport of two boilers, each 4.4 meters high and weighing 90 tons. The transport route extended from Gunzenhausen in Middle Franconia via the ports of Roth and Linz to Wels.

“The planning and handling of special transports is part of our day-to-day business, but it is always exciting when orders with a short preparation time and different modes of transport are processed together with other Felbermayr departments,” Matthias Pichl, project manager and branch manager at Felbermayr Nuremberg said.

Transport route of the boiler

When they arrived at the port of Roth, the cargoes changed modes – the two boilers were transferred from the low-loaders to the barge with a 400-tonne mobile crane. The further transport to Linz took place on the Danube and took about four days. The mode of transport was changed in the port of Linz. This transfer from the inland waterway vessel to two twelve-axle tank bridges with a heavy-duty tractor was carried out by a gantry crane.

The two boilers were then transported to their final destination – the thermal power station in Wels. On arrival at the final destination, due to lack of space, the unloading in front of the thermal power station was carried out by a Felbermayr mobile crane with a maximum load capacity of 500 tons. The boiler was rotated 90 degrees and reloaded onto an eight-axle self-propelled vehicle. This enabled the two containers to be transported to the front of the boiler house. The unloading from the self-propelled truck onto the shunting track was carried out by means of a lifting frame. “This and the final foundation in the boiler house were carried out by employees from the Linz branch’s contribution”, adds Pichl.

All transportation was originally intended to be done by road. However, due to postponements and construction sites, a multimodal solution had to be worked out at short notice. “Carrying out such multimodal transports – with switching between the road and water modes of transport – is one of the strengths of the Felbermayr Group. In this case, it was also the key to a successful transaction, ”explains Pichl.

The transport with a height of over five meters and a total weight of 150 tons on the narrow streets of Franconian villages was not an everyday challenge in terms of organisation and skill of the drivers.

The laying of the foundation was no less challenging: “The precise planning of the Linz branch created an optimal solution for unloading and bringing in, despite the very limited space available at the destination,” reports Pichl in conclusion.