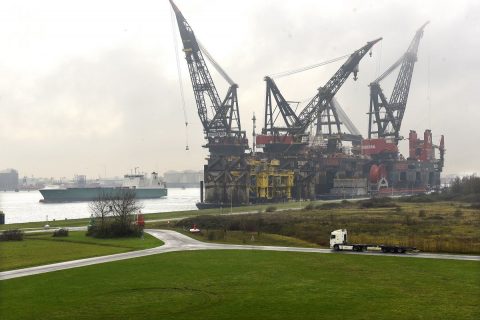 Crane vessel Thialf arrived next to the Sleipnir at the Landtong Rozenburg on Saturday 5 December. The semi-submersible crane ship is in the Netherlands for maintenance.

Up until the Sleipnir was delivered, the Thialf was the largest semi-submersible crane ship in the world. The ship, with a lifting capacity of 14,200 tonnes, measures 201.6 metres in length and has a width of 88.4 metres. Its gross tonnage (GT) is 136,709 tonnes.

The Sleipnir (187,987 GT) took over the title as largest semi-submersible crane vessel in the world when it entered into service at the end of last year. In March, the LNG-powered Sleipnir arrived in Rotterdam for the first time. The ship has a length overall of 220 metres and a beam overall of 102 metres. It has two cranes of 10,000 metric tonnes lifting capacity each.

The two ships have had permanent moorings at the Calandkanaal, which serves as a base for jobs on the North Sea, for decades. They are estimated to lie there between ten and twenty per cent of the time and are then usually prepared for the next project.

With Thialf, Heerema Marine Contractors recently dismantled seven gas production platforms off the east coast of Nova Scotia. The client for the dismantling work was ExxonMobil Canada. After a few months, the Thialf will return to the North Sea to dismantle a drilling platform.

On the Landtong, Eneco, Heerema and the Port of Rotterdam Authority are working hard on the installation of shore power for the Heerema berth. The expectation is that the ships will be able to use quayside electricity in the spring.