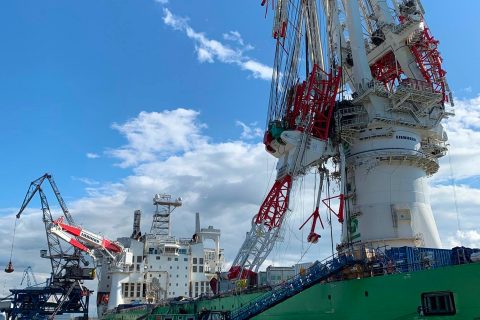 In the accident with its 5,000-tonne crane in May last year, DEME’s new offshore installation vessel Orion and its crane suffered considerable damage. In September, Liebherr stated it would repair the crane. It has now been revealed that the Gdańsk Remontowa Shiprepair Yard has been contracted to repair the ship.

The ship arrived in Gdansk on Friday, 26 March, reports Polish news channel TVN24. Grzegorz Landowski, communications director from Remontowa Holding, has told the news channel ten shipyards were in the race to win the contract. According to Landowski, “over 200 tonnes of steel will have to be replaced”. Repairs are expected to take four months.

The Orion was severely damaged in May 2020 after its newly installed crane collapsed during the load test. The new Deme vessel was moored at the Liebherr facility in Rostock to be the first vessel to have a Liebherr HLC29500 5,000-tonne crane installed.

The installation of the crane went well but when undertaking its final test, things went horribly wrong. During the overload test the hook of the crane, supplied by Ropeblock, snapped while carrying a 5,500-tonne barge and caused the crane to collapse. Both the crane and vessel sustained considerable damage in the accident.

In September last year, Liebherr said it would repair the crane, which would be “completed in the course of 2021”. The HLC 295000 is the largest offshore crane Liebherr has ever manufactured. The crane was designed with the ever-larger offshore wind farms in mind as well as the trend of dismantling disused offshore oil and gas platforms,  from which large and heavy parts have to be disassembled in open seas.