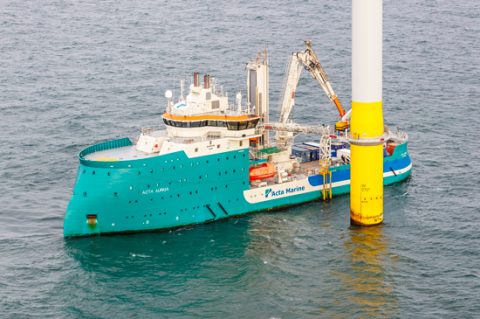 The Dutch maritime support provider, Acta Marine, will be supplying the French, renewable energy focused, engineering company, Siemens Gamesa, with a walk-2-work vessel, the Acta Auriga. It will assist with the commissioning of two French wind farms off the coast of Normandy. This contract was signed on June 23, 2023.

The Construction Support Operation Vessel, Acta Auriga, will service the wind farms off the coasts of Fécamp and Courseulles-sur-Mer offshore wind farms, off the coast of Normandy, in the second quarter of 2023 and 2024 respectively. This is when the offshore wind turbine installations are expected to begin. It will provide accommodation and transport for the personnel, cargo and tools needed for construction, departing from France’s largest port, in Le Havre.

The Fécamp wind farm is situated north of the Le Havre and the Seine estuary, 13 km to 22km off the coast. It is to be equipped with 71 7-MW turbines and will have a capacity of approximately 500MW. This should provide electricity for around 770 000 individuals. This month, the jackets arrived in Normandy from Ravenna, Italy. Their installation will begin shortly. The wind turbine blades and nacelles are being manufactured at the Siemens Gamesa plant in Le Havre.

The Calvados offshore wind farm, to the south of Le Havre, located between 10 km and 16 km off the coast, will be equipped with 64 7-MW turbines, and have a capacity of approximately 450MW. It should provide electricity for around 630 000 individuals. The manufacture of blades, nacelles and generators will begin in 2023, in the Vinci factory, on the Joannes Couvert quay in Le Havre. SDI, a subsidiary of the DEME group, is also a partner in this. The monopiles and transition pieces will be provided by Saipem, the cables by Prysmian Group, and the electrical substation will be built by Chantiers de l’Atlantique and DEME Group.

These wind farms are owned by a subsidiary of the Canadian multinational, Enbridge, CPP Investments, Électricité de France (EDF) Renewables, and the Bremmen-based offshore financing company, wpd. They will be the third and fourth offshore commercial wind farms in France respectively, and are, therefore, an important step, both in the development of the Normand and French offshore wind sector and in the achievement of France’s renewable energy goals.

Acta Marine will engage various local stakeholders in the projects, working with local suppliers such as ship agencies and port authorities. This project is also a continuation of long-standing cooperation between Acta Marine and Siemens Gamesa. The construction and maintenance of the wind farms will thus provide for hundreds of new jobs in the region.