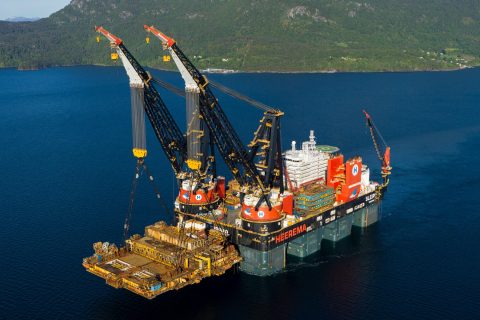 Heerema Marine Contractors and AF Offshore Decom operating together under the name ‘HAF Consortium,’ have successfully removed the topsides of Fairfield Energy’s Dunlin Alpha. The removal of the topsides, weighing around 9,000 metric tons, was achieved over the course of two operations.

The Dunlin Alpha platform, situated about 137 km northeast of Shetland, a British subarctic archipelago in the Northern Atlantic, located between the United-Kingdom and Norway,  first produced oil in 1978. Fairfield Energy then acquired Dunlin Alpha in 2008 and took over operations in 2014. The decommissioning process began in early April of this year, as a group operation between the Heerema and AF Offshore Decom teams.

Two semi-submersible crane vessels were used in the process. The first, named the Thialf, after Thor’s servant, in Norse mythology, completed the first half of the decommissioning process in April. This included hook-down and preparatory activities, as well as the removal of  3,500 metric tons of modules, and their transport to the AF Offshore Decom Environmental Base at Vats, Norway, where over 95% of the Dunlin Topsides will be recycled.

The final lifting campaign was performed by the semi-submersible crane vessel Sleipnir, in mid-June. This vessel was named after the eight-legged horse ridden by Odin and replaced Thialf as the world’s largest semi-submersible crane vessel in 2019.  Hook-down activities were optimised so as to maximise the final lifting weight of the Module Support Frame (MSF) to make full use of Sleipnir’s lift capacity.

After the successful hook down, Sleipnir returned to the Dunlin Alpha on May 31st and transferred five modules weighing approximately 3,500 metric tons altogether, to its deck. The MSF rigging, weighing almost 550 metric tons, was then connected to the pre-installed and purpose-built lift points. This was the only time the structure was lifted since it was installed with a floatover method. Sleipnir removing the 11,750 metric ton MSF in a single lift was an industry first. It was then transferred to the quayside suspended in the vessel’s cranes. Overall, Sleipnir moved 15,500 metric tons in under 60 hours.