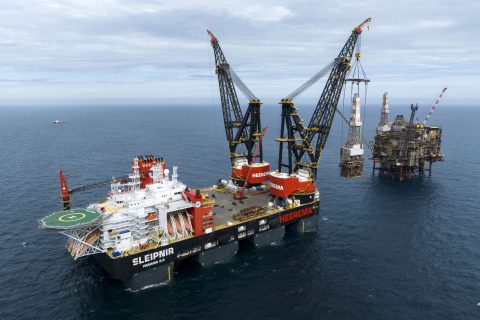 Heerema assists in the decommissioning of British drilling rigs

The Brae Alpha West Drilling Rig and Brae Bravo upper main jacket removal was executed on behalf of their client, TAQA Group, a diversified utilities and energy group headquartered in Abu Dhabi.Over 12,000 metric tons of steel were safely removed and transported to the AF Offshore Decom yard, the Environmental Base Vats, in Southern Norway. There, over  95% of the materials will be reused and recycled. For this project, Heerema deployed the semi-submersible crane vessel Sleipnir, named after the eight-legged horse ridden by Odin, and replaced Thialf as the world’s largest semi-submersible crane vessel in 2019. Sleipnir, was recently used in the removal of  the Fairfield Energy’s Dunlin Alpha’s topside.