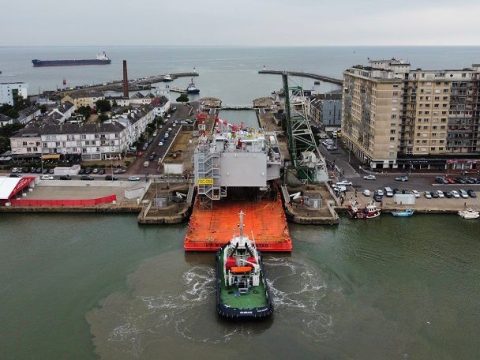 The topside of the Fécamp Offshore Windfarm has been transported from Saint Nazaire port, on the Loire estuary, to an interim storage port in Cherbourg-En-Cotentin. The transport was organised by the Antwerp-based company, Manora Logistics.

The planned production is equivalent to the domestic electricity consumption of more than 770,000 people, i.e. more than 60% of the population of Seine-Maritime. The turbines will be located between 13 and 22 km off the coast of Fécamp, on a total surface of 60 km². It is expected to be operational by November of next year, and will be in operation for at least two decades..

Construction of this third French wind farm began on June 2nd, 2020. The foundations were built by Saipem, Bouygues Travaux Publics and Boskalis, and installed by Slepnir. The jackets arrived in Normandy from Ravenna, Italy in June. The wind turbine blades and nacelles are being manufactured at the Siemens Gamesa plant in Le Havre, on the quay Hermann du Pasquier. Siemens Gamesa. This is the first manufacturing facility to have both offshore wind turbine nacelle, and blade manufacturing, all under one roof. They will be preassembled in Cherbourg before being installed.