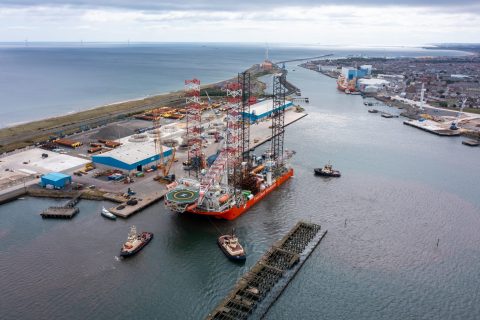 The Blue Tern jack-up installation vessel has visited the Port of Blyth for the first time. It will be used to transport components from the port of neighbouring wind-farm construction sites.

The Blue Tern, formerly known as the Seafox 5, is a four-legged, self-propelled, jack-up offshore wind turbine construction vessel. With a length of 158 metres and a breadth of 50 metres, it has a 7,000-tonne variable deck load carrying capacity. It also has a propulsion capacity of 7 knots DP 2, and a 1,200-tonne main crane, which has an 800 metric tonne capacity at a 30-metre radius. The Blue Tern is specially designed to operate in harsh offshore conditions, in water depths of up to 65 metres.

The Blue Tern is berthed at one the Port of Blyth’s deep-water berths, at the busy Battleship Wharf terminal, which has been strengthened for heavy lift operations. The Port of Blyth also has 15 hectares of land immediately available across two secure terminals served by heavy lift quays.

Indeed, the port has been involved in the construction of the Neart na Gaoithe offshore wind farm, a 450MW wind farm located 30 kilometres north of Torness, off the east coast of Scotland. It is owned by EDF Renewables UK and ESB. The Blue Tern will be used to transport components from Blyth to the construction site, for the jacket installation campaign.