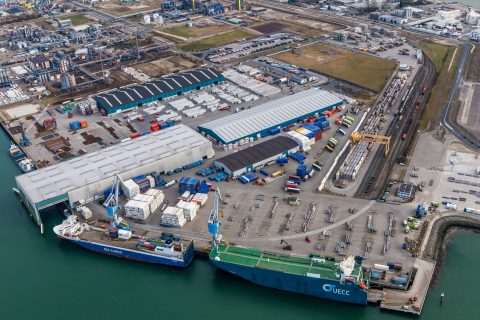 After more than 10 years in the role, Robert Jan Timmers has stepped down as breakbulk business developer in the Port of Rotterdam. Twan Romeijn has been appointed to take over his duties effective immediately.

For 10 years, Timmers has been of the key persons in Rotterdam’s breakbulk sector. During this time he managed the accounts of shipping lines and agents and worked on plans to expand the port’s breakbulk industry, which are now being realized through the so-called breakbulk carousel in which four breakbulk and project cargo terminals get room to expand their terminal operations.

Twan Romeijn has already been working for the Port of Rotterdam for nearly four years. First as a graduate intern and later as a business analyst.

Like Timmers, Romeijn will be working under Danny Levenswaard, the breakbulk director of the port. In a recent interview with PCJ Levenswaard said that Port of Rotterdam sees room to grow its conventional breakbulk and project cargo volume. The port is pursuing that through the breakbulk carousel and the development of an offshore centre on Maasvlakte 2.

In the interview with PCJ, Levenswaard already said it remained to be seen if the port could build on the first-quarter growth.  “We recorded a nice growth rate, but we still have nine months ahead of us so we’ll have to see what happens throughout the year.”

Breakbulk and project cargo port developments will be one of the key topics of the Project Cargo Summit, a two-day international conference about the transport of large and heavy cargoes, which is organised by Promedia Group on the 11th & 12th of September, 2019 in Rotterdam. Among the speakers will be Port of Rotterdam, North Sea Port and Port of Esbjerg. For more information about this dedicated project cargo and heavy-lift event, please visit www.projectcargosummit.com.