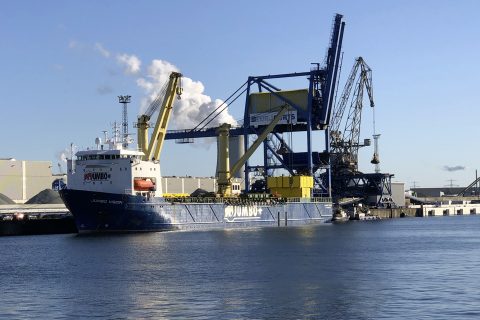 Jumbo: “No evidence cranes came into contact in Rostock incident”

With the salvage operation of the Liebherr cranes that sunk in Rostock Port underway, the investigation into the cause of the accident is still ongoing. ‘Although a very complex matter, there is currently no evidence to suggest the Jumbo Vision’s cranes came into contact with the cranes loaded on board,’ says Jan Hein Reeringh, Communication Manager at Jumbo.

Two Liebherr cranes fell into the water after being loaded onboard Jumbo Maritime’s heavy lift vessel Jumbo Vision on 31 January. Initially, it was suggested by an eyewitness that one of the harbour cranes on deck was tipped over by one of the shipboard cranes of the 6993-DWT vessel. The subsequent vessel movements then caused a second crane to fall overboard. Based on the still ongoing accident investigation, Jumbo now states there is no evidence of this.

‘We have been able to determine the Liebherr cranes were already out of the ship’s cranes when the accident occurred,’ adds Reeringh. ‘In addition, the shipboard cranes are undamaged.’ He also adds that it is a complex situation in which he expects it will be difficult to pinpoint a root cause. ‘We expect the investigation may take quite some time before it is concluded. Of course, we will try to implement any lessons learned as soon as they come to light to prevent something like this from happening again.’

The ship itself also suffered some damage due to the incident. Repairs have already been carried out and were class approved after which the ship was allowed to leave Rostock Port on 20 February.

Hebo Maritiem Service’s floating crane Hebo Lift 9 was initially supposed to leave Rotterdam on 19 February to assist in the salvage of the sunken cranes, but weather conditions on the North Sea delayed this to Wednesday 26 February. The arrival of this vessel is now expected on Thursday 5 March.

One of the first tasks, however, is the salvaging of the two fifty-metre long lattice booms of the cranes, which weigh 35 tonnes each. The specialists from Baltic Taucherei- und Bergungsbetrieb Rostock GmbH have detached the lattice booms of the mobile harbour cranes to salvage these just before the floating crane arrives. This is carried out by the floating crane Baltic Lift, which is on-site and has a maximum lifting capacity of 200 tonnes.

On 3 March, the first boom was recovered. The second boom is to be recovered on 5 March in the course of the day. Subsequently, the cranes will be salvaged by the Hebo Lift 9.

The salvaging of the booms as well as the attaching of the lifting shackles by the Baltic divers takes place in close coordination with the arrival of the Hebo Lift 9. This is to ensure harbour traffic will not be impaired by repeated relocation of the oil barrier.

The oil barrier was put in place because pollutants leaked from the sunken cranes’ hydraulic oil and diesel tanks. Divers subsequently emptied the tanks, but the oil barrier has been maintained as a precaution.