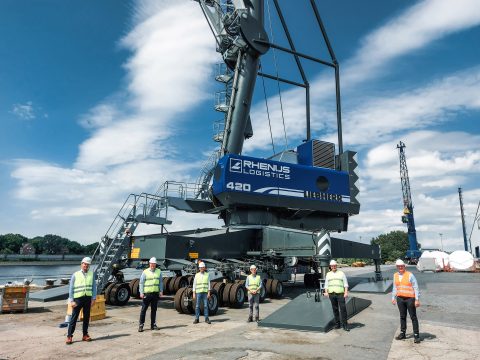 Rhenus Midgard is replacing a crane at the Dradenau Terminal in the Port of Hamburg with a new Liebherr machine to handle breakbulk and containers.

The LHM 420, recently delivered by project logistics specialist Rhenus Project Logistics, will be deployed instead of the LHM 320. The outgoing crane served at the port for over 20 years.

In addition to a significant increase in productivity, the crane also means a further reduction in emissions at the Port of Hamburg for Rhenus thanks to state-of-the-art drive and exhaust technology.

At the Dradenau Terminal, a multipurpose facility operated by Rhenus Midgard is located near the large container terminals of HHLA and Eurogate. Over the past years, the LHM 320 has handled machinery, plant and equipment for industrial and production facilities and paper in particular, accumulating more than 40,000 operating hours.

With the aim of shortening berthing times and accommodating the ever-increasing volume of cargo handled, Rhenus Midgard ordered a new Liebherr LHM 420 mobile harbour crane, which has been in operation at the Port of Hamburg since the end of June.

The new crane will give Rhenus Midgard higher handling speeds, an increased maximum load and more outreach. This investment is one of further steps towards increasing the company’s productivity.

Helge Behrend, Managing Director of Rhenus Midgard Hamburg: “With the new mobile harbour crane, we will see further increases in handling volumes and, also in combination with the ‘Greenliner’ concept that has been successfully established for more than ten years now – moving goods from the road to the water – we will make an even greater contribution in Hamburg to reducing emissions and relieving the pressure on roads.“

The LHM 420 was delivered from Rostock to Hamburg in fully assembled condition. After a 10-hour sea voyage with the open deck carrier “Aura”, the new machine was ready for operation shortly after arrival. The new machine has a maximum lifting capacity of up to 124 tonnes and a 48-meter boom for best reach.

“We are looking forward to continuing our trusting cooperation with the Rhenus Group. The new crane means both productivity increases and cost reductions for Rhenus Midgard Hamburg. Liebherr is proud to be part of the ‘Greenliner Concept’ initiated by Rhenus Midgard with the LHM 420 and thus to reduce emissions,” says Eric Hein, Liebherr Sales Manager for Mobile Harbour Cranes in the German speaking countries. 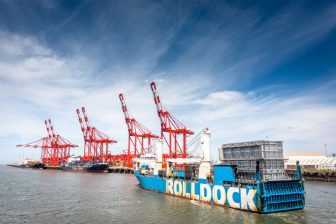